Using the title “Believe in Fantasy” a blurry video of “unexplained phenomena” has also been posted, vaguely showing what resembles a dragon flying through the air:

UPDATE (12/5/12): Disney has debuted its flying dragon as a one-time appearance for the New Fantasyland opening:

UPDATE (12/3/12): On the eve of Walt Disney World’s multi-day New Fantasyland media event beginning, Disney has released what appears to be the first real footage of their new flying dragon in action over the Magic Kingdom (jump to the end):

Here are a couple of frames from that video, offering a closer look: UPDATE (12/3/12): A low-res photo has surfaced (forwarded to me by @BryanWojtanik88) of the dragon flying at night during recent testing: 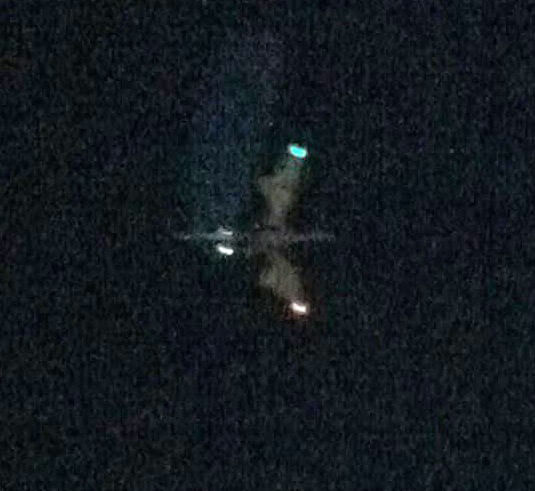 A Disney fan named Ben also sent in a report from having seen the dragon last night in person over the Magic Kingdom area:

I just wanted to let you guys know that the dragon was circling over Magic Kingdom last night. I went out at about 2:45 specifically to see if I could find it.

As I approached the tunnel on World Drive before Contemporary, there it was circling around the back of Magic Kingdom. However, this time, instead of flying quickly, it was actually just elegantly gliding around at a pretty slow speed. I decided to try to get as close as I could. At this point, though, there were security trucks stationed at multiple points from Contemporary back to the Monorail barn. I pulled over next to one and got out to watch. The security guard told me he wouldn’t make me leave as long as I did not try to take any pictures or video. If I did that, he said he would have to make me leave. There were some OC Sheriffs up the road, so I decided he wasn’t joking.

The whole time the dragon was flying around above MK, it was being illuminated from the ground by a spotlight of some sort. It give it kind of an eery glow that would seem to me as something done on purpose. With the spotlight on, it was impossible to make out the parachute attached to the top of the dragon. This made me wonder if the dragon is possibly only intended to fly at night, in order to mask the system by which it is flying.

After a couple minutes of watching the dragon, the most incredible thing happened. It started flapping its’ wings!! I knew about the rumors that it flapped its’ wings and breathed fire, but I assumed it was just speculation. The way its’ wings flapped was very elegant and fluid, just like any dragon you may have seen flying in movie’s, etc. Watching it glide around gracefully combined with the fluid flapping of the wings and the light from underneath made it look like one of the most amazing things I have seen in my life. The realism was much more astonishing than I could have ever expected it to be. WDI has really outdone themselves with this thing and I am truly amazed at how brilliant it is.

UPDATE (12/2/12): The “dragon” has been spotted being tested in the Magic Kingdom area in preparation for the New Fantasyland grand opening. YouTube user PopSong1 has uploaded a video that barely shows a pair of lights flying through the sky but more prominently features the loud sound of the ultralight vehicle’s engine, the basis for this dragon.

The dark, out-of-focus shape in that video surely resembles the flying dragon Walt Disney Imagineering was testing back in June at an airfield in California:

At the time, many speculated this dragon would be used for the upcoming Avatar land for Disney’s Animal Kingdom, but now it seems the fire-breathing dragon will fly over New Fantasyland, perhaps in a show called “Believe in Fantasy.” Or it could just be used for the Magic Kingdom expansion’s grand opening and never seen again.

It’s also noted that 2012 is the Chinese Year of the Dragon.

Disney asks curious fans to follow along on the Tumblr blog at disneydragons.tumblr.com and use the hashtag #BelieveInFantasy on Twitter to report any dragon sightings. With the official opening of New Fantasyland on December 6, it seems those sightings may not be far away.