Today, the official Disney Parks Blog held a live chat with Imagineer Melissa Jeselnick, who shared additional insight on what the updated version of Test Track at EPCOT will be like when it reopens later this year. Jeselnick is the Assistant Project Manager for the update, working on its spring 2011, tasked with bringing new technology, a new look, and a new story to the high-speed Walt Disney World attraction.

The first question of the chat revealed a first look at the new marquee posted outside Test Track, pictured above. The ride’s sleek new design aesthetic is prominently featured on this sign and will continue throughout the updated attraction.

The questions that followed repeated many known details about the Test Track update, including its new emphasis on designing cars rather than testing them. According to Jeselnick, Guests will use “an interactive design kiosk, so in the full experience, you can start from a line, then shape your vehicle and add attributes – pick the colors, the tires, and make it truly your dream vehicle. Everybody in the vehicle will have their ride design, whether designed individually or as a group. As you move through the four groups, you’ll see how the design stacked up against the sim car design.” It’s all built on top of custom software created just for this attraction.

Jeselnick also described the previously-released piece of concept artwork below as depicting moments “just before our final virtual scene. By that point of the ride, you’ve experienced Capability, Efficiency, Responsiveness, and Power, and we’re setting you up for Speed.” 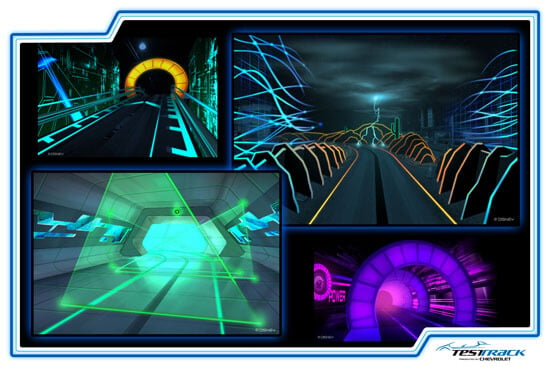 Elaborating further, she wrote about each of the four main show scenes in the ride. “Capability is where your car is tested for rough road and weather conditions. Efficiency tests your car design’s environmental footprint. The Responsiveness phase tests maneuverability, and finally, Speed is tested.”

During the live chat, I asked about the ride’s balance between virtual and real-world sets and props, wondering how much time will riders spend looking at screens instead of real-world items. Jeselnick replied, “We talk a lot about being in the digital space, but it’s still a physical experience. We’re using a lot of new technology to tell the story, but it is still a dynamic physical experience.”

She also confirmed that the ride’s track would not change, featuring “the same track layout that we know and love.” Only the visuals and sounds surrounding the experience will be new. The ride’s new music “will be futuristic” with “a whole new soundtrack that will not only compliment the attraction with music but special sound effects too.”

Likewise, the single rider and FastPass options will still be present, though these portions of the queue will limit the vehicle customization. Jeselnick explained, “The full experience allows you to do a lot of customization with your vehicle; the FastPass and Single Rider lines allow for an expedited queue experience and select you a custom vehicle of your choice to take with you on your ride all the way through the post-show.”

The vehicle customization will continue beyond the ride, enabling Guests to continue interacting with their design in a post-show area. Jeselnick described this area’s features as beginning with “a scoring opportunity, not just with the Guests in your car, but Guests throughout the day. From there, we’ll move into other opportunities to play with your design with multiple interactive elements. The showroom space will still be there with the Chevrolet cars, and we’ll have our own photo ops with different concept cars.”

Back in April 2012, we talked with Jeselnick and Showed Producer Trevor Bryant about the Test Track update:

Test Track is scheduled to reopen at EPCOT in its new form in “late fall” 2012.