Audio-Animatronics technology has come a long way from its early days in The Enchanted Tiki Room. While that attraction is still enjoyed daily in Disney’s theme parks, newer advancements not only offer more lifelike “robotic” figures performing preprogrammed shows, but the promise of fully automated and interactive characters in the years to come.

And it’s just that interactivity that the creative engineers at Walt Disney Imagineering were “playtesting” on an audience of fans at the recent 2011 D23 Expo in Anaheim, Calif. Within the convention’s Walt Disney Parks and Resorts pavilion, “The Amazing Destini” not only offered attendees a chance to have their fortunes told by an Audio-Animatronics figure, but they also took part in ongoing research, helping Imagineers improve Destini’s ability to naturally and autonomously converse, without the aid of humans behind the scenes.

At the D23 Expo, Walt Disney Imagineering researcher Josh Gorin explained the technological details that power The Amazing Destini as well the reasons why Disney has developed the project:

What seems to be a relatively simple interaction for Guests chatting with Destini (who likely assume there’s a person “behind the curtain” controlling the character) is actually a complex computer system analyzing in real-time facial expressions, speech content, and other telling features that help guide a conversation. Moreover, each Guest at the D23 Expo who talked with Destini provided a rich data set for Imagineers to learn more. As Gorin put it, “Everyone who comes to talk to Destini is helping Imagineering to make this technology better.” 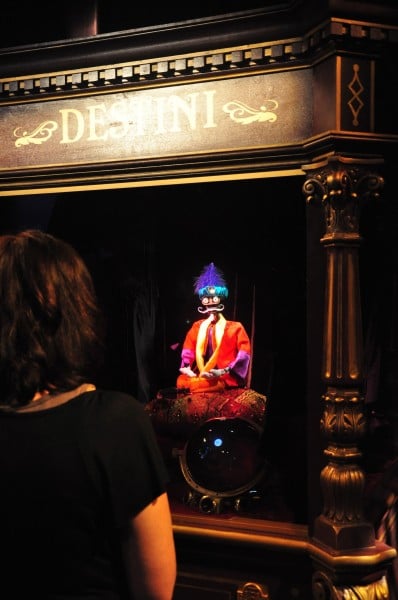 The Amazing Destini is part of Imagineering’s Living Character Initiative, which has in the past few years included Lucky the Dinosaur (a free-roaming, interactive, life-sized Audio-Animatronics dinosaur) and The Muppet Mobile Lab, which featured Muppets characters Beaker and Bunsen Honeydew in an interactive street show. But these characters required someone from Disney present at all times to control their movements as well as what they said. The knowledge gained from Destini is paving the way for future characters to be placed within Disney’s theme parks that can interact with Guests in a meaningful, in-depth way without requiring anyone to be digitally puppeteering or voicing them. Gorin describes the system behind Destini as a combination of “computers, sensors, and artificial intelligence.” Still, ultimately, the goal is to have all that technology disappear into the background as Guests feel like they are simply chatting with a real character.

Those attending the D23 Expo did have a chance to see the technology in action via a large screen display mounted nearby The Amazing Destini. Imagineers appropriately dubbed the display the “Communicore,” a reference to the old EPCOT attraction where Guests could learn more about the computer systems that powered the park’s many attractions and Audio-Animatronics figures.

The screen showed the variety of attributes Destini took into account while talking with a Guest, including analyzing facial expressions to determine mood, movement, and even knowing whether that person had interacted with Destini before – a short-term memory of sorts. Facial expressions could change the direction of a conversation, depending on if the Guest appears to be happy, sad, angry, surprised, or impatient, with Destini able to react accordingly just as a real person would. 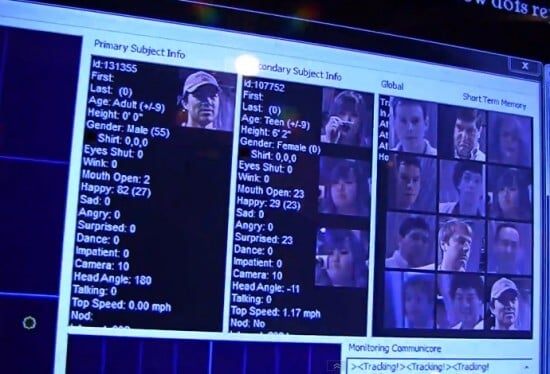 But The Amazing Destini isn’t specifically installed permanently into any of Disney’s theme parks. Instead, this research project is setting the stage for future characters to come. After seeing this demonstration, it’s easy to imagine being greeted into a restaurant by a familiar Disney character, in Audio-Animatronics form, who will be not only able to chat with Guests before they are seated but also welcome Guests back if they are frequent patrons. Queue entertainment could also be taken to the next level, with lifelike characters engaging in humorous conversations with Guests, entertaining them as they wait to board a ride. In fact, if this technology works well enough, characters like Destini could form the next generation of meet-and-greets, becoming attractions on their own.

It will likely be a few years before this technology fully finds its place within Disney’s theme parks. Still, when it does, Disney fans who had a chance to chat with The Amazing Destini at the 2011 D23 Expo can look back and be proud they had an opportunity to help Imagineering in the development of Disney magic. 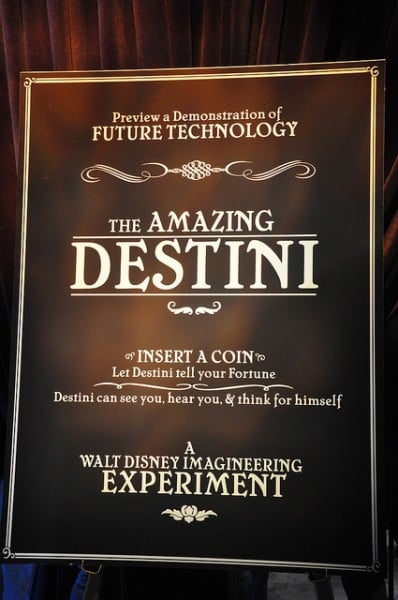