A few ghostly inhabitants of Disney’s Haunted Mansion attraction may be getting reanimated as part of an upgrade and enhancement project at Walt Disney World’s Magic Kingdom.

Ongoing changes outside the popular spook-filled attraction include the transformation of the former outdoor graveyard into a new walk-through crypt, rumored to include interactive elements. These rumors stem from a previous test of an interactive game that was temporarily set up in The Haunted Mansion‘s queue.

But in addition to these vague but-known changes, Disney’s Imagineers appear to be once again “plussing” the interior of the attraction as well.

Three new projectors have been spotted, installed opposite the famous mirrors depicting Hitchhiking Ghosts who “follow you home” by riding alongside guests in Doom Buggies at the end of the ride.

UPDATE: Animated Hitchhiking Ghost projections have materialized inside the attraction, acting as temporary covers for enhancements behind the scenes. Click here for an HD video of the computer-generated ghosts and more explanation. These projectors are mounted along with the ceiling, pointed directly toward the mirrors (above and behind the Doom Buggies depicted in the old Disney artwork above). Their position suggests the static figures who have hitched countless rides with guests for decades may become a bit more animated soon. Disney has not announced any details surrounding this addition, but it’s not hard to imagine that these stationary ghosts may “come to life” once the projectors are put into use, given Disney’s recent impressive use of projectors to animate Cinderella Castle. (Again, click here for a video of the temporary update.)

This isn’t the first time Disney has updated or enhanced The Haunted Mansion in Orlando, or even the first time this particular scene has been the potential home of additions.

In 2007, Disney’s Imagineers unveiled other technological and scenic enhancements inside the Mansion that included adding a changing portrait hallway, creating an all-new staircase scene with ghostly footsteps, and sending Madame Leota floating around her scene from within her crystal ball. Here’s a video of the changes as seen on reopening day: 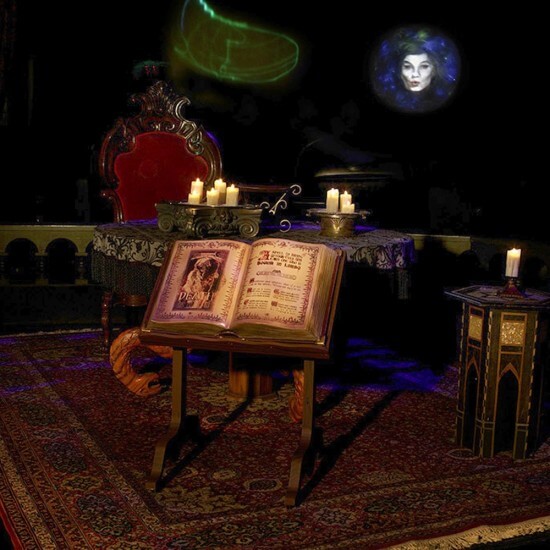 What didn’t quite make the cut during the 2007 upgrade was the addition of on-ride guest photos during the Hitchhiking Ghost mirror scene. Special purple and green lighting were installed and activated, along with camera equipment for testing. However, the tests presumably didn’t go as well as Disney would have hoped, as no photo op was ever made “live.” Since then, the new lighting has been turned off.

Likewise, the news of new projection effects should be taken mainly as speculation at this point, since no official announcements have been made. It’s possible the projections may never materialize if the technology doesn’t quite work out, like the on-ride photos.

Previous enhancements to The Haunted Mansion include an animated tombstone of Madame Leota in the attraction’s exterior graveyard: But this tombstone, along with all the others that include tributes to the ride’s Imagineers and creators, have been removed (for now) to make way for the upcoming cryptic additions.

No date has been set as to when guests might see the premiere of the new projections or enhanced queue.

WARNING – DISNEY MAGIC SPOILER: Since we’re already “pulling back the curtain” a bit for this article, discussing the technology behind Disney effects, I thought I’d also offer this link, detailing how the ghost-in-the-mirror effect is achieved. But it’s a MAJOR magic spoiler (especially one particular behind-the-scenes photo), so don’t say I didn’t warn you.