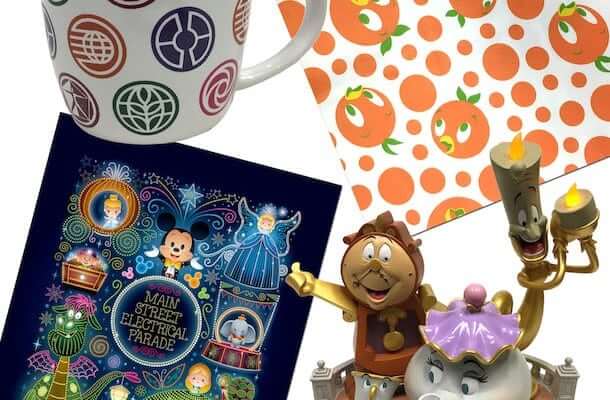 Last week Disney Parks Blog merchandise expert, Steven Miller, got us worked up into a frenzy about the products coming this year. We definitely have some amazing Disney items to look forward to in 2017! Take a look at the countdown list below to see the items we know will “magically” make their way into your cart. The Main Street Electrical Parade is returning to Disneyland Park, and a brand new merchandise collection will be released to mark the occasion. The collection will consist of apparel and artwork that capture the charm and whimsy of this fan favorite. Popular jewelry brand Alex and Ani are introducing a whole new Park Icon charm collection. Featuring the icons of parks from both coasts, this accessory is not optional for the true Disney fashionista. Read more HERE. Socks are rather dull–until they feature Haunted Mansion prints! Two different sets are being released this year. One makes use of the classic maid costume print. The other spotlights the funny stretching room portraits. The awesome Disney Parks Tsum Tsum series lives on. This time the torch has been passed to the lovable crew from Frontierland’s Country Bear Jamboree. Whether you want to have an imaginary Disney tea party or just add something new to your curio cabinet, these Disney Parks mini tea sets will do the job!  Two sets we will see in 2017 are themed after Cinderella Castle and Pirates of the Caribbean. Smaller Disney pets have some items being added to the Disney Tails collection just for them. A set Minnie ears and a Minnie costume harness are just a few of the items to look forward to this year! A Minnie headband is a staple in the wardrobes of many a Disney fan, and Disney has released countless designs in recent years. To make it a little bit easier for us shopaholics, Disney has now come up with the genius idea of a removable Minnie bow so you can easily switch from one look to another! This Orange Bird dress is just one of the items coming to a new “nostalgic” Disney collection that features apparel and accessories. On October 1, 2017, Epcot will be celebrating its 35th anniversary. With that comes a brand new retro merchandise collection featuring everything from apparel to home decor. For Disney, the biggest opening of 2017 will surely be Pandora–The World of Avatar. The new land is scheduled to open at Animal Kingdom during the summer. To mark the occasion, Disney Parks will be releasing three limited edition countdown pins with some of the concept art originally produced to represent this mysterious place.

Beauty and the Beast Gallery Figurine So far 2017 is looking like it will be a great year for Disney Parks merchandise! We can’t wait to see what else they will have up their sleeve!