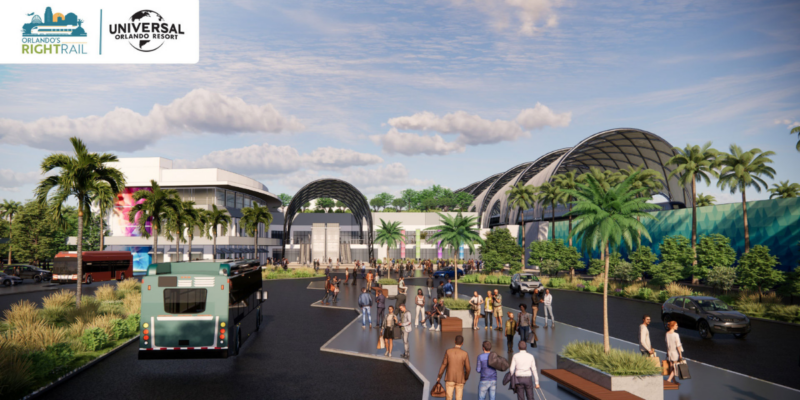 Universal Orlando recently announced its collaboration in a multi-million-dollar project to boost the area with a brand-new SunRail station.

As Universal Orlando continues to develop a completely new theme park, Universal’s Epic Universe, the Resort recently announced it would join a multi-million-dollar project in collaboration with Orlando’s Right Rail coalition, making significant progress toward realizing the vision of commuter rail connectivity throughout Central Florida — one of the fastest growing regions in the nation.

“We are one step closer to creating a multi-directional commuter rail system that benefits our entire region,” said John Sprouls, Executive Vice President and Chief Administrative Officer for Universal Parks & Resorts, in a statement. “The new SunRail corridor and convention center station will make it easier for residents to get to work, the airport and to the places they love. And it will enable business growth within the International Drive area and across the region.”

As part of the project, Universal will pledge 13 acres of land to the District at no cost to taxpayers, in addition to supporting the District’s financing of up to $125 million in private activity bonds. Universal also stated it would support the operation and maintenance of the station so there is no cost to Orange County taxpayers and, along with Orlando’s Right Rail coalition, plans to contribute and support the District’s guarantee of $13 million in annual ticket sales — the current estimated yearly operating costs.

The Orange County Convention Center station is expected to provide transportation for thousands of workers in the tourist area and visitors every day, as well as help double SunRail’s annual ridership and revenue, as the station would also be near Universal’s upcoming theme park, Epic Universe, scheduled to open its doors in Summer 2025.

Will this new project make it easier for you to travel to Universal Orlando Resort or move around the area? Let us know in the comments below!