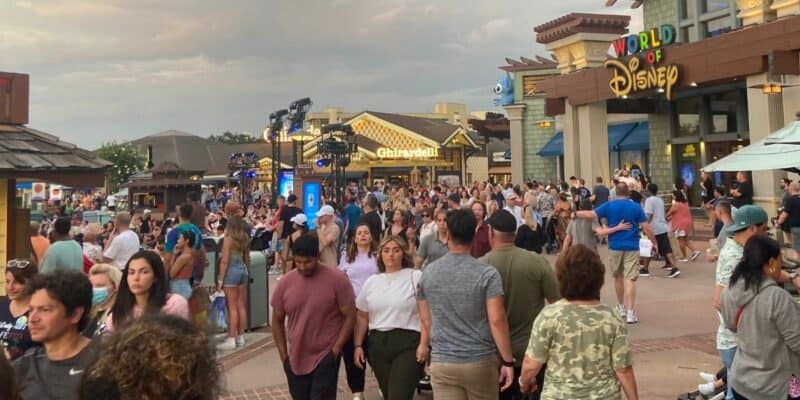 A man was arrested after a violent brawl at Walt Disney World.

According to a recent report from Orange County Sheriff’s Office, an intoxicated man unleashed a rampage at a Walt Disney World restaurant.

The specific restaurant, T-REX Restaurant at Disney Springs, is a place where Guests can “Eat, Shop, Explore and Discover” while surrounded by dinosaur animatronics. The eatery is very similar to Rainforest Cafe, which is also found at Disney Springs as well as Disney’s Animal Kingdom.

The incident began after Arnette Gregory Jr., 50, was officially cut off from the bar at the restaurant due to how intoxicated he was. Gregory was told to leave but refused.

Eventually, the man left but returned to the restaurant 15 minutes later and let himself into the restaurant’s kitchen. Gregory was apparently looking for the manager of the eatery.

The manager told authorities that “Arnett was aggressive, threatening and wanted to fight. As Arnett was walking out of the restaurant, Arnett stopped in the dining area (and) lunged at him again, this time shoving him in the chest while shouting and swearing loudly, causing a commotion as the families The other is eating; the report said.” He (the principal) advised him one time, Arnett pushed him, and he fell into a toddler. Once he walked out of the restaurant, Arnett pushed him again and walked away.”

Security was quickly called and arrived on the scene to take care of the situation. According to the report, Gregory hit the deputy after he asked him to come with him.

“The other OCSO deputies and I went to put Arnett in handcuffs,” said the deputy. “I grabbed his left wrist and started to put him behind his back, at which time Arnett began to tense up and straighten up and pull his arms to the front of his body in an attempt to stop us from putting handcuffs on him. As he moved his body to fight us, he lowered his head towards my left arm and seemed to bite me.”

Eventually, authorities were able to restrain Gregory enough to put him in handcuffs. “Once Arnett was secured in handcuffs, we started taking him to the office and drove him through the crowd of shoppers. Arnett started screaming loudly and swearing, causing several people to stop what they were doing and stare at us.”

“While communicating with Arnett, I detected a strong smell of alcohol impurities coming from him, watery, bloodshot eyes, and he was having difficulty walking and needed help,” the deputy wrote.

Arnett Gregory was arrested and charged with third-degree felony battery of a law enforcement officer and two misdemeanors of battery and resisting an officer without violence.

Earlier last year, a drunk woman was arrested at the same restaurant after leaving a child behind at the restaurant bar, according to the official report from the Orange County Sheriff’s Office.

The incident occurred on April 16 after employees at the T-REX Restaurant in Disney Springs noticed the child left alone and became concerned for their well-being. Eventually, employees contacted law enforcement, who were able to track down the woman.

Stay tuned here for the latest news and stories out of Walt Disney World.