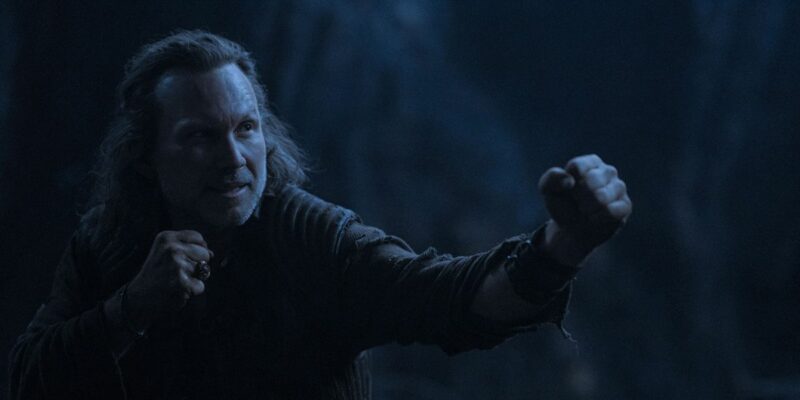 A major actor made his Willow (2022) debut this week, but the secret to his casting is definitely unconventional.

Speaking to Gizmodo, Willow showrunner Jonathan Kasdan revealed that acting legend Christian Slater bagged the part of Allagash thanks to Kasdan imagining a Nineties sequel to the original 1988 movie, and wondering who would have starred in that.

As revealed in episode ‘Prisoners of Skellin‘, Allagash is an old friend and adventuring companion to original Willow (1988) hero, Madmartigan, played by Val Kilmer.

In the episode, Allagash is first revealed assuming Madmartigan’s identity, locked in a cage deep within the trolls’ stronghold.

Related: How This Iconic Character Returned in ‘Willow’

After fellow prisoner Willow (Warwick Davis) clocks his true identity, Princess Kit (Ruby Cruz) manages to set him free and get further information out of the roguish adventurer.

Allagash tells Kit and Willow of how he joined Boorman (Amar Chadha-Patel) and Madmartigan on their quest for the Kymerian Cuirass, and selflessly took Madmartigan’s identity to fend off the trolls while he acquired the cuirass from a secret vault deep within Skellin itself.

It’s in that vault later in the episode that we are reunited, in a fashion, with Madmartigan, who speaks to his daughter from within an ominous portal.

Slater’s a natural fit for the world of Willow, charming, ever-so-slightly-goofy, and a convincing swashbuckler to boot. The fact he wasn’t in the original Willow is a surprise. What’s not a surprise is Kasdan thinking of him for his imaginary sequel, ‘The Adventures of Madmartigan’, which would have seen Madmartigan and his band of heroes take on a new quest in the fantasy world.

“The idea immediately, once we saw where we were going with this, [is] there was a movie you never got to see. It came out in 1992 and it was The Adventures of Madmartigan and it had Madmartigan leading a team of adventurers on a daring quest.

And we thought, ‘Who would be in that movie?’ And Christian was the first name that popped into our heads… The first thing I told Christian when I was finally able to get him on the phone was exactly what I just told you. And he said, ‘Absolutely, man, I would have been in that movie in a heartbeat.’”

Kasdan said Slater was a natural fit for the role, with his effortless charm but also slightly shady charisma working well to lend an air of suspicion to this caged adventurer.

“He (Slater) loves this kind of adventure story. He loves Star Wars, he loves swashbucklers and scoundrels, and he’s been waiting to play one. So it was sort of serendipitous when this role emerged and we wanted someone who could fill in some of the gaps in what happened to Madmartigan and what that quest would be.

But the first and most obvious thing about it was that that person would not be someone we could trust. He would have to be a real con man and a double dealer and out for himself in every way. And that was the second thing I explained to Christian. And he was even more in because he does that naturally.”

At the end of ‘Prisoners of Skellin’, we saw Allagash fending off trolls to once again save his friends. With just two episodes of the show’s debut season to go, will he make another appearance? Only time will tell if our swashbuckler will actually make it out of the mountain.

Did you enjoy meeting Christian Slater’s character? Tell us in the comments below.