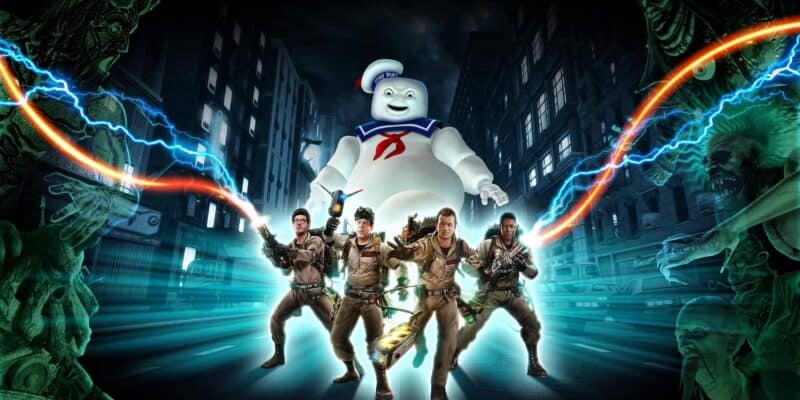 The ‘Ghostbusters’ franchise has hit the ground running once again. However, this time, the new creators took inspiration from Stephen King.

This location is a familiar-looking retreat that immediately gave us vibes of The Shining, thanks in part to its dated decor and snow-covered exterior.

‘The Shining’ is a psychological horror novel by Stephen King, published in 1977. The story is about a man named Jack Torrance (Jack Nicholson) who becomes the caretaker of the Overlook Hotel, an isolated and haunted Resort in the Rocky Mountains.

As the winter approaches, Jack becomes increasingly erratic and violent, and it becomes clear that he is under the influence of the hotel’s malevolent spirits.

His wife, Wendy, and their young son, Danny, who possesses psychic abilities, become trapped in the hotel with him and must fight to survive as Jack descends further into madness.

Looking at some of the concept art that has recently surfaced, it’s clear that Illfonic, the developer of the game, decided to pay homage to Stanley Kubrick’s 1980 film adaptation.

Ghostbusters: Spirits Unleashed took to Twitter to reveal new concept art. “Here’s some really cool concept art of the Hudson Canyon Lodge. It may be snowing outside, but you may get some chills inside.”

Here is some really cool early concept art of the Hudson Canyon Lodge. It's may be snowing outside, but you may still get some chills inside. 😨#TBT #concept #art. pic.twitter.com/9ACZt9SnUr

It’s not an exact replica of The Overlook Hotel, but it has enough similarities to make you question it. Another look shows us a much more modernized version of the lodge. However, there is still another revealing twist.

This new photo takes us right back to the world of ‘The Shining’. It is revealed that the Hudson Canyon Lodge was once known as Grady’s Lodge.

So, how does this all correlate to ‘The Shining?’

Well, the former caretaker of the Overlook, the one who had previously gone on a horrific rampage, was Delbert Grady (Charles Grady in Kubrick’s film).

Along with his daughters, Alexie and Alex Grady, being the twins seen coaxing Danny Torrance in the hotel’s twisted hallways, uttering the memorable line, “Come play with us, Danny.”

What do you think of the new ‘Ghostbusters’ video game? Let us know in the comments.