Car Crashes Into Walt Disney World Sign - Inside the Magic 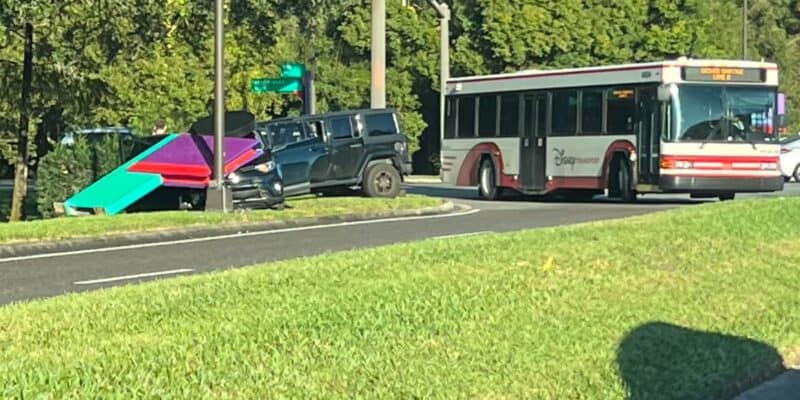 An accident left one of the Disney World road signs damaged and completely toppled over.

A car crashed into a sign at the Walt Disney World Resort last week. The accident involved at least two cars, with one of them slamming right into the iconic purple road signs at the Orlando Resort.

You can check out a photo of the accident down below, courtesy of Andrea B:

According to reports from Guests, the Jeep made a wide U-turn, running a minivan off the road into the pole and sign. Saw it happen on the way to work. This is the only piece of information we have on this accident at the moment.

In the photo, it appears that one of the Walt Disney World buses attempted to help block traffic heading toward the crash.

Earlier last year, a police car was involved in a wreck on Walt Disney World property. Many services are employed thanks to Disney’s Reedy Creek District, including firefighters and police. Officers from the surrounding areas can be contracted to patrol the property in order to keep Guests safe.

This means that when visiting Walt Disney World, Guests may see police throughout the Resort, especially when they are driving to and from the Parks.

Comments Off on Car Crashes Into Walt Disney World Sign