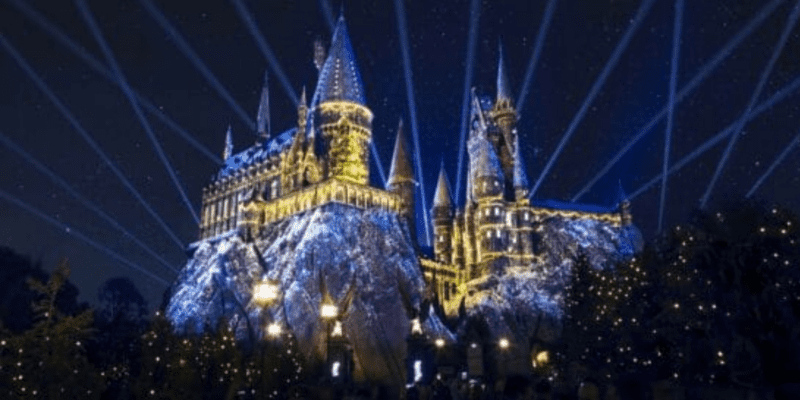 The Wizarding World of Harry Potter at Universal Orlando Resort and Universal Studios Hollywood is any Potterhead’s dream. Take the Hogwarts Express from Diagon Alley to Hogsmeade, let your wand choose you at Ollivander’s, and grab a Butterbeer!

Harry Potter and the Forbidden Journey is in a league of its own – both a thrilling attraction and an essential part of the Theme Park’s atmosphere. Its exterior perfectly matches Hogwarts Castle from the Harry Potter films! At night, Guests can enjoy The Nighttime Lights At Hogwarts Castle, an ongoing projection show visible from Hogsmeade at Universal Islands of Adventure.

Though most Guests look forward to the sparkling projections on Hogwarts Castle, it caused issues for others this weekend. Reddit user u/Miserable-Antelope95 was walking through Hogsmeade when they were forced to stop moving so other Guests could watch the show.

The Guest called Universal Orlando Resort’s crowd control policies “foolish” and said they ruined the atmosphere of Hogsmeade. Though they didn’t blame any individual employees, the Guest said that one Team Member spent 20 minutes “barking” through a megaphone:

The new procedure is to stop all traffic through [Hogsmeade]… He held us in place for about 20 minutes, as the crowd around us surged. Everyone around us was as irritated as we were. Throughout the entire experience, the man with a megaphone shouted pointless instructions on a loop, to hear himself talk.

Before this happened, we were enjoying the atmosphere, but having some guy shout at you for 20 minutes absolutely ruins Hogsmead.

…I’m not attacking the guy that barked at us for 20 minutes, I’m drawing attention to a terrible experience due to the poorly thought out procedures.

Many commented that this is typical crowd control during The Nighttime Lights At Hogwarts Castle, and it is possible to take another path to avoid the traffic surge. But the Guest insisted that another option wasn’t available on this particular night.

“The instructions that were drilled into us were essentially that we weren’t allowed to enjoy the rest of [Hogsmeade] once released, and had to either rush through or get on a line,” the Guest explained. “The experience was terrible.”

More on The Nighttime Lights At Hogwarts Castle

Every Harry Potter fan will be thrilled to experience this dazzling nighttime celebration of Hogwarts. From Universal Orlando Resort:

Brighten Your Night. Come experience a dazzling spectacle of music and lights. On select nights, watch in awe from Hogsmeade™ village as projections are cast against the majestic backdrop of the castle. Embrace your Hogwarts™ pride as the four houses are celebrated in stunning light and sound. It’s a beautiful way to end your day at Universal’s Islands of Adventure.

Have you had trouble viewing The Nighttime Lights at Hogwarts Castle?