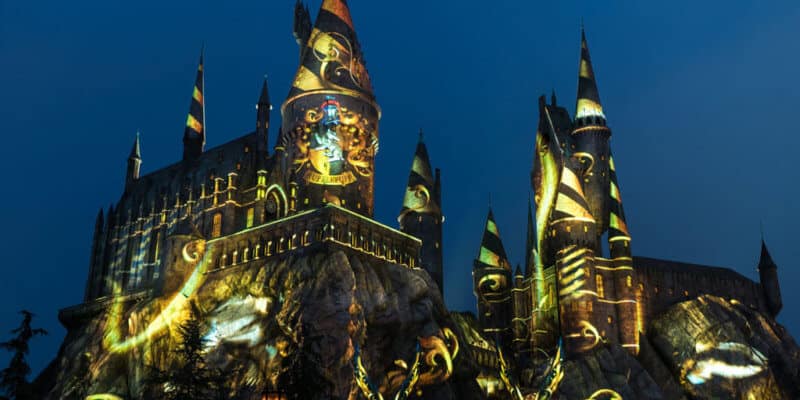 There are a lot of exciting things that have been happening at Universal Orlando Resort lately. From the recently opened Jurassic World: Velocicoaster to the announcement that holidays magic will be coming back to the theme parks on November 13, there is a lot of excitement for Universal fans.

Well, now, there is even more to celebrate at Universal Orlando Resort! The incredible show Nighttime Lights at Hogwarts Castle will be returning to Islands of Adventure tonight! The show had been on hiatus since the theme parks reopened last summer.

Nighttime Lights at Hogwarts is an incredible show that brings Guests even more of that Harry Potter magic. From the projections to the music to the fireworks shooting off, there is nothing to not love about Nighttime Lights:

Come experience a dazzling spectacle of music and lights. On select nights, watch in awe from Hogsmeade™ village as projections are cast against the majestic backdrop of the castle. Embrace your Hogwarts™ pride as the four houses are celebrated in stunning light and sound. It’s a beautiful way to end your day at Universal’s Islands of Adventure.

What is super exciting about Nighttime Lights at Hogwarts is that Guests visiting Hogsmeade at the Wizarding World of Harry Potter will have multiple chances to watch the show. Heck, they can watch the Hogwarts Castle show more than once if they love the lights that much — seriously, no judgment here! Nighttime Lights at Hogwarts will be shown every twenty minutes from dusk until the theme park closes.

Even though the shows on Hogwarts Castle will begin at dusk, it is highly recommended that Guests see the later shows — simply because the projections are even more beautiful and pronounced when it is darker.

Imagine ending your perfect day at Universal Orlando’s Islands of Adventure riding Harry Potter and the Forbidden Journey and then seeing a beautiful show projected onto Hogwarts Castle itself. Talk about magical!

Universal Studios’ Islands of Adventure is open daily from 9 a.m. until 10 p.m. throughout July.

Are you excited to see the Nighttime Lights return to Hogwarts at the Wizarding World of Harry Potter? Let us know in the comments!

Comments Off on Nighttime Lights At Hogwarts Returning to Universal Studios Tonight!