Questions We Have After 'Avatar: The Way of Water' - Inside the Magic 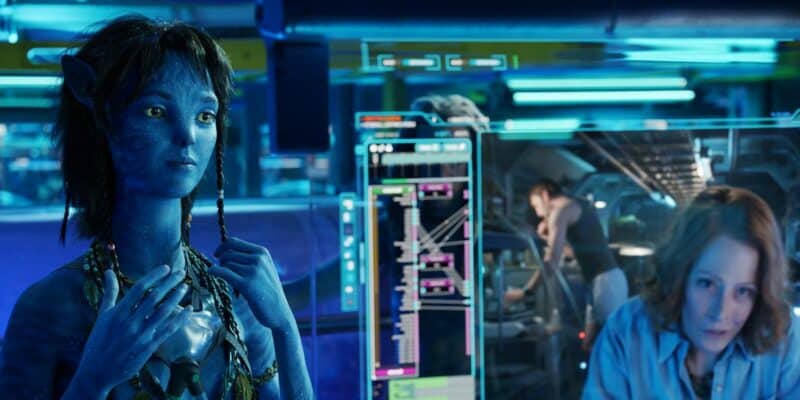 Director James Cameron’s Avatar: The Way of Water (2022) has revived the story of the Na’vi 12 years after the first movie debuted. Its story of the Sully clan exploring the new reef lands of the Metkayina people takes audiences further into the exotic world of Pandora. But it also left questions open, to be followed up in hopeful planned sequels. Here’s what we’d like to find out…

***SPOILERS FOR AVATAR: THE WAY OF WATER BELOW***

Who Is Kiri’s Father?

Kiri (Sigourney Weaver) is one of the Sully family’s adopted children. We find out during the movie that she was born from Dr Grace Augustine’s Avatar after her tragic death in the first film. But the characters themselves question who the mysterious father could be, with some of the kids jokingly suggesting that it could be Grace’s old assistant Norm (Joel David Moore).

Her natural affinity with the water and Pandora’s ecology as a whole could suggest another answer: she is born of an immaculate conception from Eywa herself, after Grace’s consciousness tried and failed to be transferred via the planetary nervous system in the first film. I’m sure if the film series continues Kiri’s powers will only continue to grow: if she starts with murderous coral and commanding shoals of bioluminescent fish now, who knows what she might be capable of in the future?

A large part of The Way of Water saw left-behind-human Spider (Jack Champion) reunited — sort of — with his father, Quaritch (Stephen Lang), who has returned to the planet in an Avatar, his consciousness restored from a backup created hours before the first film’s final battle.

As they discover what they mean to one another, Spider manages to temper Quaritch’s worst instincts, staying him from outright murdering innocent villagers, while Quaritch opts to surrender his leverage to save the teen’s life when it is used as a bargaining chip by Neytiri (Zoe Saldaña).

Spider eventually saves Quaritch’s life after he is left to drown by Jake in their climactic confrontation onboard the sunken human ship, but chooses to go back to his adopted Na’vi family. This tension and the aftereffects of Neytiri demonstrating a clear lack of care for his life will no doubt have ramifications going forward in the series. It could be that Spider may be tempted to return to his newly discovered sort-of-father, but hopefully his bond with the Sully clan, and particular Kiri, will keep him on the side of good.

Is Jake Going to War?

For much of The Way of Water, Jake Sully (Sam Worthington) is opting to protect his family by hiding them in the Metkayina clan’s islands. He is forced into confrontation after Quaritch and his fellow Avatar hunters track them down, and after the battle, when he offers to leave and leave the water people in peace, the Metkayina’s leaders, Ronal (Kate Winslet) and Tonowari (Cliff Curtis) claim him and his family as members of their own clan.

The film’s final shot is Jake looking steely and declaring the reef their new fortress. This suggests they will be taking the fight directly to the humans, no doubt resulting in a rematch between himself and Quaritch and further involvement for Edie Falco’s General Ardmore. We saw the humans building a large-scale, sophisticated city, fast. Maybe the Na’vi will rally and strike back at the invaders in the heart of their new home. Sad for them, but great for us: no-one does crunchy mech battles quite like James Cameron.

What questions did The Way of Water leave you with? Let us know in the comments below.

Comments Off on Questions We Have After ‘Avatar: The Way of Water’