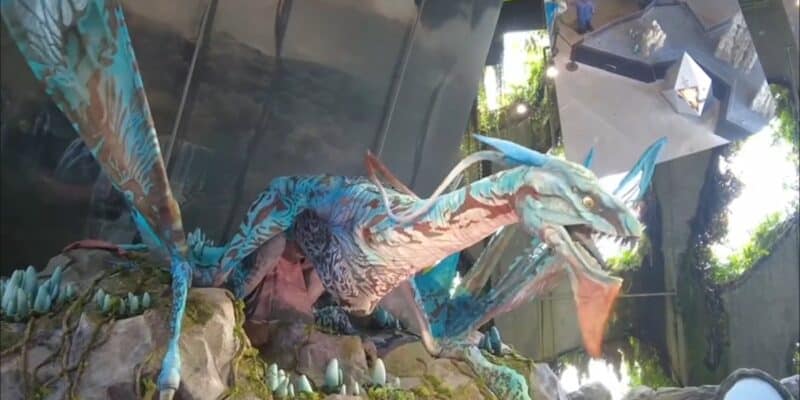 There’s a new and impressive Avatar experience out there — and it isn’t in any Disney Park!

As most people know by now, James Cameron’s blockbuster Avatar (2009) has a long-awaited sequel coming out this December 16 — “Avatar 2”, AKA Avatar: The Way of Water (2022). After approximately 13 years, the highest-grossing film experience (beaten only by Marvel Studios’ 2019 Avengers: Endgame, a franchise of which Cameron himself does not like) will be returning to theaters via a sequel. Despite potentially having a “dreadfully long runtime”, many curious audiences are set to return to see where the blue aliens (and the human minds implanted into alien-human hybrid bodies!) are headed this time around.

With Avatar once again in the spotlight after many years, it’s natural that Cameron and Co. would want to reintroduce the public to the franchise and its story, characters, and world. This time, The Walt Disney Company has acquired the rights to the franchise, and with the development of the themed land Pandora — The World of Avatar located in Walt Disney World Resort’s Animal Kingdom theme park, the future and potential expansion of the franchise is definitely brighter than before.

The newest “Avatar experience” is part of the promotion for Cameron’s new film, Avatar: The Way of Water. The movie will be set significantly underwater, and will star returning leads Zoe Saldaña (Neytiri) and Sam Worthington (Jake Sully) who are back as parents, while Sigourney Weaver plays Kiri, Jake and Neytiri’s adoptive teenage daughter. Jemaine Clement also stars as marine biologist Dr. Ian Garvin, while Kate Winslet is Ronal, a free diver of the Metkayina. Even Stephen Lang returns as series antagonist Colonel Miles Quaritch, whose memories have been inserted into a Na’vi Avatar body following his demise in the first film.

Now, James Cameron himself is teasing the world with a new Avatar-themed experience called, well, Avatar: The Experience. Set up in Gardens By The Bay’s Cloud Forest in the island city of Singapore, the Experience is being touted as a uniquely interactive Avatar event that can be felt live and in person. What’s proving to be the star draw? A brand new animatronic that’s something not even Walt Disney World’s Animal Kingdom has seen.

The official Avatar: The Experience website features a video introducing the event by the director himself, James Cameron, and Gardens By The Bay officially describes the event accordingly:

The world premiere of Avatar: The Experience will open on 28 October, 2022, at Cloud Forest in Gardens by the Bay. This immersive experience brings two worlds together and opens your eyes to the magnificent story of AVATAR, the highest-grossing film of all time.

Visitors to Cloud Forest at Gardens by the Bay are in for something amazing this fall! Be among the first people on the planet to see, explore and connect with this spectacular story told like never before. Encounter a full-scale parent Banshee in motion. Interact up close with the first realization of a baby Banshee and a Viperwolf pup. Even new creatures from the upcoming film, Avatar: The Way of Water will be included in this immersive walkthrough experience, exclusively premiering in Singapore.

The huge “E-ticket” attraction (to borrow a Disney Parks term) is no doubt the massive Ikran or Banshee animatronic that looks like it could be plucked straight from the Avatar movies.

Discovering Pandora posted footage of the Banshee live in-action, and many were instantly impressed by its expressive range of motion:

A look at the amazing life size animatronic Ikran from the newly opened Avatar Experience at Gardens By The Bay! #Avatar #JamesCameron #Avatar2 pic.twitter.com/njt2Cyw6Td

Fans of the Disney Parks and Animal Kingdom over at Walt Disney World, however, weren’t all too happy. Twitter user @JamesMc46012825 said:

Yaaayyy, now give it to Animal Kingdom immediately

Yaaayyy, now give it to Animal Kingdom immediately

Why isn’t there something like this at @WaltDisneyWorld’s Animal Kingdom?

Why isn’t there something like this at @WaltDisneyWorld’s Animal Kingdom?

Adding to the sentiment, @Benglesmith chimed in with:

Pretty impressive. I wish there was a place at Disney World for them to put something like this. A land of some sort, maybe. A photorealistic land based on these movies even. Maybe in a park where animals are on exhibit. Just spitballing.

Pretty impressive. I wish there was a place at Disney World for them to put something like this. A land of some sort, maybe. A photorealistic land based on these movies even. Maybe in a park where animals are on exhibit. Just spitballing.

Why the sarcasm, you may be wondering? In fact, it’s a well-known issue among Disney Park fans that the Walt Disney World Resort’s Animal Kingdom that houses the official Avatar theme park lacks animatronics or a fully “Na’vi” (the blue alien) presence. There are no character “face” actors dressed as Na’vi, on account of the aliens being approximately 10 feet tall.

And although it is fully immersive, à la The Wizarding World of Harry Potter over at Universal Studios — significant budget cuts during the construction of the land have resulted in the only real, (albeit extremely impressive animatronic-wise) tangible Na’vi in the entire location, the Shaman of Songs, relegated to the end of the short dark ride, Na’vi River Journey. All other Na’vi presence is merely on-screen or in images and photographs used as set dressing throughout the land. However, there still is hope that the Banshee animatronic will not end up collecting dust and in fact make its own Flight of Passage across the ocean because of this little fact.

Interestingly, this “immersive walk-through” has been openly announced to be a collaboration with “Disney Location-Based Experiences”, which is ostensibly a part of Disney Parks, Experiences and Products (yes, the department headed by Josh D’Amaro):

Cityneon Holdings, Disney Location-Based Experiences and James Cameron and Jon Landaus’s Lightstorm Entertainment have produced a brand-new immersive walk-through event inside Cloud Forest. Avatar: The Experience invites guests to connect with the alien world of Pandora, its bioluminescent environments, mystical creatures, flora, and the captivating culture of its indigenous people, the Na’vi. Come experience and celebrate this epic story in this one-of-a-kind setting.

All of this tells us that it’s actually fairly likely that this will not be the last time we see our sizeable Ikran friend.

More footage of the Banshee and other immersive features from the Avatar: The Experience event can be seen in this video by The Straits Times:

What do you think about this Ikran Banshee ‘Avatar’ animatronic? Where do you think it could end up? Share your thoughts in the comments below!

Comments Off on Amazing New ‘Avatar’ Animatronic Debuts, Fans Question Why It’s Not In Disney World