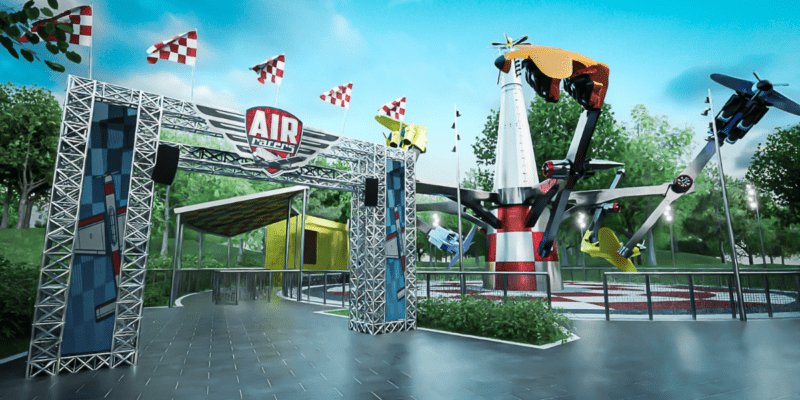 The first all-new attraction just landed at a popular theme park, with four more attractions to come as part of an amazing expansion opening next year.

Theme Parks in America are constantly changing and improving, trying to provide the most exciting, fun, and memorable experiences for Guests of all ages. With this in mind, a popular theme park recently announced an all-new expansion, bringing five new attractions, dining locations, midway games, and more in 2023 as part of the Park’s anniversary celebrations, and we can’t wait to visit and enjoy all the new additions!

Aeronautica Landing is currently in construction at Carowinds (@Carowinds), and the Park recently shared an exciting update, as the first attraction of the new themed land was installed.

CONSTRUCTION UPDATE: Air Racer is the first ride to be installed for Aeronautica Landing, the new themed area coming to #Carowinds in 2023.

🚧 CONSTRUCTION UPDATE: Air Racer is the first ride to be installed for Aeronautica Landing, the new themed area coming to #Carowinds in 2023.

Air Racer is the first of five new attractions landing at the Charlotte theme park as part of this new expansion. The other attractions will be Air Walker, Gear Spin, Gyro Force, and Hover and Dodge. Aeronautica Landing, the Park’s new expansion, will also be home to several midway games and an all-new restaurant inspired by the high-end and exclusive sky clubs, Terminal A.

Aeronautica Landing will be the highlight of Carowinds’ 50th anniversary celebrations. Guests will be able to soar the skies of Carolina in this latest expansion, the fourth rethemed area to be introduced at Carowinds since County Fair in 2017 and, most recently, Blue Ridge Junction in 2019. This new land is described by Carowinds as follows:

At the center of the 50th anniversary celebration will be Aeronautica Landing, a tribute to the Carolinas’ spirit of invention, exploration, and aviation, where guests can immerse themselves in the history and future of flight. Construction is now under way in the Crossroads areas of the park, which will be completely renovated and renamed as Aeronautica Landing, complete with the introduction of five new themed attractions opening in 2023 as well as a retheming of an existing ride, for a total of six rides.

Aeronautica Landing is scheduled to open in Spring 2023 at Carowinds, though no official date has been announced yet. Inside the Magic will keep you updated as more information becomes available.

Carowinds recently announced its extended operations, as the Charlotte theme park adopted a year-round schedule with some of its most thrilling and popular attractions available for Guests to enjoy this winter in addition to WinterFest, the Park’s seasonal event.

Are you excited about Aeronautica Landing opening at Carowinds in 2023? Let us know in the comments below!