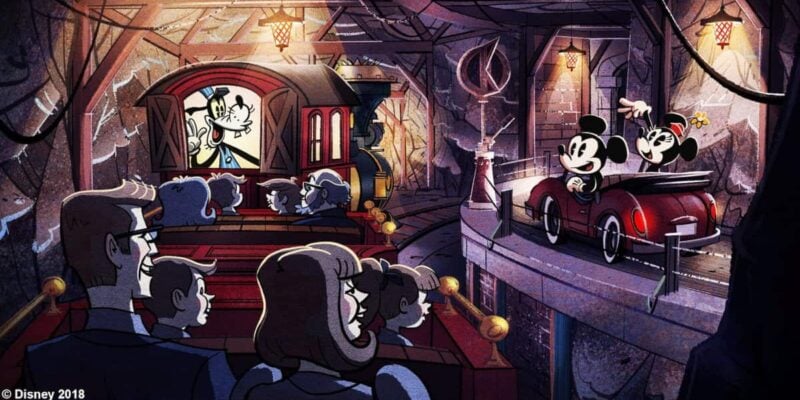 Mickey & Minnie’s Runaway Railway is one of the most popular attractions at Walt Disney World Resort in Orlando.

The ride, located at Disney’s Hollywood Studios, gives Disney Park Guests the chance to “burst into Mickey and Minnie’s world.” The darling duo are taking a leisurely drive to a picnic in their sporty roadster—with Engineer Goofy’s train following merrily along. Plot twist—you get to go, too! Climb aboard a runaway railway and embark on a whirlwind ride through a world where the rules of physics don’t apply. Prepare for unexpected twists, slapstick gags and mind-boggling transformations at every turn, as Mickey and Minnie try to save the day.

Based on the recent award-winning Mickey Mouse cartoon shorts, Mickey and Minnie’s Runaway Railway is the first ride at any Disney Park that stars Mickey Mouse and friends.

But, it’s not done there.

As Disney has already previously announced, Mickey & Minnie’s Runaway Railway will not only be located at Walt Disney World Resort, but it will also be located in Toon Town at Disneyland Park in Anaheim, California.

The attraction is set to open on January 27, 2023, but what if we told you it was going to be different than the one in Orlando?

While Disney has not confirmed it yet, there was a permit filed by Disney last year that showed that this ride will have 16 scenes including the preshow, which is three more than the defined scenes at the attraction in Disney’s Hollywood Studios (13 total scenes). This permit was found in DSNY Newscasts’ Youtube video in December 2021.

If this is true, it means we could be seeing some major additions for the attraction when it opens next month compared to the ride we’ve grown to love over the last couple of years at Disney’s Hollywood Studios.

It would be a lot of fun to see this attraction extended a bit longer compared to the one we’ve seen. If it is, this wouldn’t be the first time that Disney has made subtle changes or extensions to a ride at Disneyland compared to one at Walt Disney World. Pirates of the Caribbean, Space Mountain, and “it’s a small world” are just a few examples of rides at Magic Kingdom that were shortened or changed slightly compared to their counterparts outwest.

Are you excited for Toon Town to reopen soon? Let us know in the comments!