Pixar-Inspired Food Coming to Disney Cruise Line - Inside the Magic 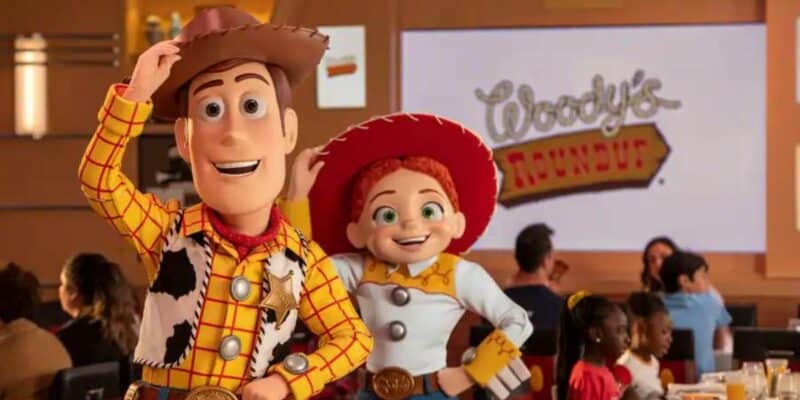 Starting in early January, Pixar Day at Sea will arrive onboard the Disney Fantasy! This is an exciting day filled with Pixar-themed experiences, such as character meet and greets, pool parties, a nighttime spectacular, and shows.

But, one other aspect of this event is the cuisine. Throughout this event, there will be plenty of themed dining experiences for Guests to enjoy as part of the festivities, from an interactive breakfast to treats to dinner and everything in between!

First, start off the day right with breakfast- with Woody and friends, that is! A new interactive character breakfast called “Hey Howdy Breakfast with Woody and Friends” will be themed to Woody’s Roundup from Toy Story 2, featuring Pixar Pals Sheriff Woody, Jessie, and Bullseye.

Breakfast items available will include muffins and other pastries, pancakes, French toast, and Mickey waffles. The Prospector’s Breakfast Burrito is also available, which is filled with sausage, scrambled eggs, cheddar cheese, and potato puffs. Additionally, there is a Bullseye’s Mini Pancake Tower, which has bananas, peanut butter, raspberry jelly, and whipped cream.

For those who don’t want a large meal, there are some lighter meal options, including smoked salmon with cream cheese, onions, and capers; grapefruit; and a yogurt parfait or plant-based berry oatmeal parfait.

There are plenty of other breakfast items to go with this theme, per Disney Parks Blog:

Three signature breakfast dishes are also part of the “Hey Howdy Breakfast with Woody and Friends” menu, including a buttermilk biscuit entree with sausage gravy; a plate featuring two fried eggs of your choice on hashbrown potatoes with chorizo; and a plant-based combo featuring scrambled eggs, sausage patties, pancake, hashbrown and grilled tomato.

This dining experience requires advance reservations, which Guests can secure up to 30 days ahead of their trip, as long as it is still available.

Besides these incredible new breakfast offerings, there will also be treats featured throughout the day, including the Joyful Lemon Cupcake, based on the character Joy from Inside Out. This cupcake has lemon sponge cake with vanilla creme frosting.

Other tasty finds include the Toy Story Letter Blocks, which are chocolate blocks filled with candy, and the Sheriff Rice Krispy Treats Badge. These themed desserts can be found throughout the Disney Fantasy in certain grab-and-go locations, such as Cabanas, Cove Cafe, and the concierge lounge.

Besides the breakfast and treats during this special day, there is also a themed dinner menu inspired by California, as that is the home of Pixar Animation Studios. Appetizers include baked shrimp mac and cheese, as well as smoked salmon and smoked trout rillette. There is also a salad with goat cheese, roasted yellow and red beets, pistachios, and honey dressing.

These tasty offerings will be only available during Pixar Day at Sea, starting in January 2023. You won’t want to miss out on these incredible offerings next year!

Are you going to be a part of the Pixar Day at Sea events? What do you think about these dining experiences? Tell us below!

Comments Off on Pixar-Inspired Food Coming to Disney Cruise Line