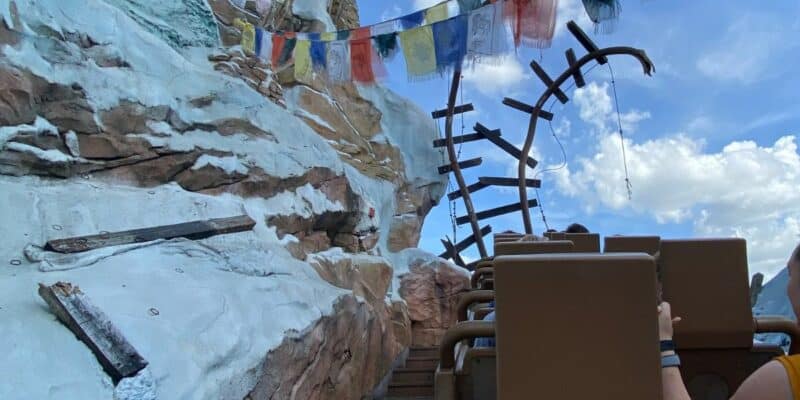 There are so many options for Guests to choose from when visiting all the Disney Parks. Walt Disney World is home to four sprawling theme Parks, two water parks, and an enormous shopping center known as Disney Springs that Guests can enjoy and get immersed in.

The ride whips Guests back and forth and plunges them up and down treacherous-looking train tracks. As Guests enter the fake touring company “Himalayan Escapes,” they are engulfed by an incredible amount of authentic Asian props and artifacts, all solidifying the history of the mysterious Yeti.

Once Guests board the steam train-themed coaster, they leave the station and head toward the mountain. It may be a surprise to you, but Expedition Everest’s story doesn’t actually take place on Mount Everest, but on “the forbidden mountain.” If you look at the attraction from far enough away, you can see Mount Everest, which is colored and shaded differently toward the right side of the mountain. The actual peak of the mountain is part of this “forbidden mountain” that Disney created for the attraction’s story.

Of course, if you’ve ever been to Disney then you know that not everything is always “perfect.” From ride stops to full-on breakdowns, you never truly know what kind of experience you’re in for.

Recently, Expedition Everest stopped for a few Guests right at the top of the first lift hill. Instead of a fast-paced chase through the forbidden mountain, these Guests had quite a different experience, which they shared to TikTok. However, we can honestly say we’ve never seen Guests pass the time on a stopped ride quite like this. You can check out the video down below:

True story… we got stuck at the top of #everest in #disneyworld but luckily we had some #pokemonpacks to open before evacuating 9 stories 🙃 #rollercoaster #pokemontiktok #disneyparks@sylveons_lovley.bows @Disney Parks #fypシ #viraltok

True story… we got stuck at the top of #everest in #disneyworld but luckily we had some #pokemonpacks to open before evacuating 9 stories 🙃 #rollercoaster #pokemontiktok #disneyparks @sylveons_lovley.bows @Disney Parks #fypシ #viraltok

As you can see, as the Guests were stuck on the ride, they thought of a pretty unique way to pass the time: opening Pokémon cards. They didn’t pull anything too crazy, but still, this is certainly a fun way to distract yourself from the fact that you’re nearly 100 feet in the air.

Expedition Everest is truly a ride that has stood the test of time at the Disney Parks and will continue to impress in the coming years. While Universal has a slew of new and impressive rides with Hagrid’s Magical Creatures Motorbike Adventure and VelociCoaster, it’s hard to compete with the originality and craftsmanship of Expedition Everest. More on Expedition Everest – Legend of the Forbidden Mountain at Disney’s Animal Kingdom:

What’s your favorite way to pass the downtime while at Walt Disney World?