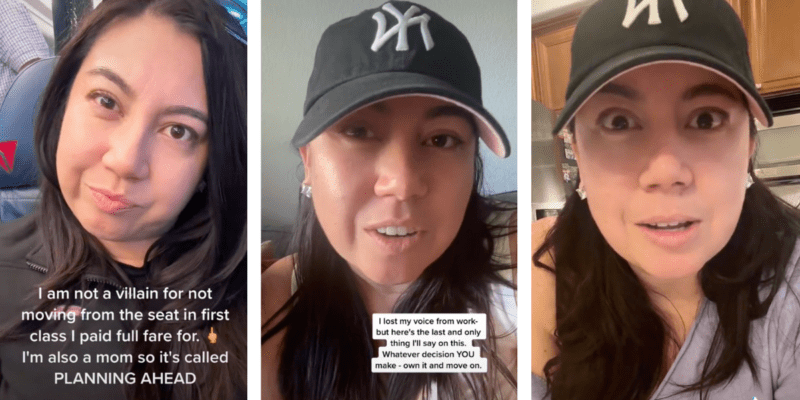 Traveling can be stressful, especially with kids. That’s why it’s essential to book your flight ahead of time if your family needs to sit together on an airplane!

A family on Maresa Friedman’s flight did not, which led to a situation that went more viral than the passengers ever could’ve imagined. Friedman originally posted a short video from the airplane on TikTok (@maresasd):

“I am not a villain for not moving from the seat in first class I paid full fare for. 🖕 I’m also a mom so it’s called PLANNING AHEAD,” Friedman wrote.

The video received three and a half million views, thousands of comments, and hundreds of response videos. Many called Friedman selfish for not giving up the seat, while others said she was entitled to the seat she paid for.

In a follow-up video, Friedman explained that a family asked her to move into a different seat so that they could sit together:

Replying to @acdaniel1987 ok here’s the skinny and my thoughts ❤️

Friedman said no. Instead, she suggested the family ask three passengers from the coach if they’d like to sit in their first-class seats, and then they could sit together in coach class. But the family was unhappy with this suggestion and was angry with her for not moving. Most commenters agreed it wasn’t her responsibility to fix the other family’s problem.

“Idk why something about the airport people always feel like their emergency outweighs everyone else,” @baggysweats wrote.

“Her money, her seats, her choice, end of discussion. Anything else, talk to the hand!” @jonoscuba said.

However, some still disagreed. Brian Pakpour (@brithefamilyguy) shared the video with commentary:

#duet with @brithefamilyguy #Stitch hey there it’s your favorite elitist

Pakpour said the video “triggered” him, and he would gladly switch a first-class seat, even if it were just because someone preferred a window to an aisle. “You’re going to be so elitist that you’re like, ‘No, I got my seat, that’s it,’ and everybody in the comments is like, ‘Rah!’”

“You interpreting my behavior as elitist is not actually compassionate,” Friedman replied. “Maybe there are specific reasons as to why I choose my seats, perhaps my disability being one of them AND I hope this made you feel amazing!”

This video was met with even more support. Friedman later shared a video thanking everyone for the comments:

Great learning here: no is a complete sentence

“No is a complete sentence,” Friedman said of what she learned from the experience.

Would you have moved in Friedman’s place?