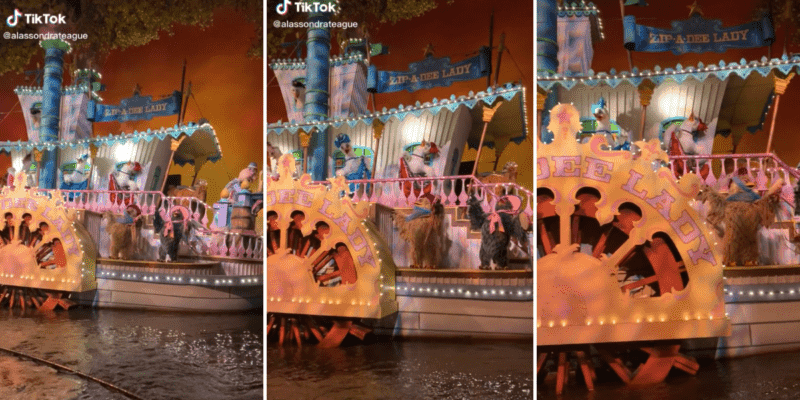 Splash Mountain continues to show multiple problems ahead of its complete reimagining. Is Disney letting the attraction die?

Splash Mountain has been in the eye of the storm for quite some time now, primarily due to the polemic of its upcoming retheming saying goodbye to Br’er Rabbit, Br’er Bear, Br’er Fox, and the residents of the Briar Patch to welcome princess Tiana, Prince Naveen, Louis, and Mama Odie in a completely new adventure opening at both Orlando and California in late 2024. However, the attraction also seems to be on everyone’s lips due to its current condition, with broken animatronics, sinking boats, and constant breakdowns and evacuations.

The Briar Patch can’t seem to catch a break, as recently, Guests riding Splash Mountain could spot yet another broken animatronic in the attraction, making the journey through the laughing place less enjoyable.

The video of this broken animatronic was posted on TikTok by Alassondra Teague (@alassondrateague), who commented that the character had had enough. You can see the video below or click here to watch it.

This chicken has had enough. #disney #disneyfails

This chicken has had enough. #disney #disneyfails

The video was taken at Walt Disney World Resort, in the attraction’s final scene, where the characters sing “Zip-A-Dee-Doo-Dah” as they bid farewell to Guests. Or at least most of them do; not that poor hen, though.

With so many growing problems at the attraction, regarding animatronics, lighting, audio, power, sinking boats, and evacuations, many fans of the beloved attraction are concerned and wonder if the complete retheming that is coming for the attraction will sort all the issues that plague the attraction.

Have you been to Splash Mountain at Walt Disney World or Disneyland lately? What was your experience like riding the attraction? Let us know in the comments below!