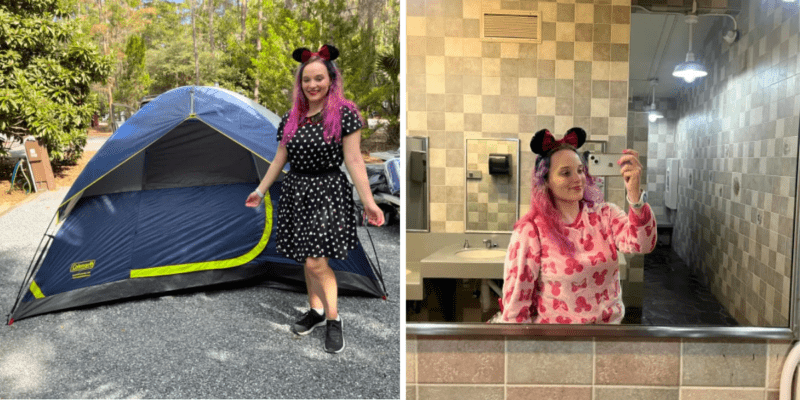 Disney’s Fort Wilderness Resort & Campgrounds offers everything from luxe cabins to camping plots that cost less than $100 per night.

These campsites are the cheapest way to stay on property at Walt Disney World Resort. Given their proximity to Magic Kingdom, a campsite is a steal for families willing to rough it in the Florida wilderness on vacation!

Jenna Clark, who has stayed at almost every Walt Disney World Resort hotel, recently reviewed the campground for Yahoo! News. Clark had never camped previously but wanted to see if the savings were worth sacrificing the Disney Resort experience.

Clark was happy to be able to check in early and was pleased with the size of the campsite but struggled to pitch her tent. After two hours of struggle with a rubber mallet, another camper was able to help the crew finish up the tent in 15 minutes. (Unfortunately, her friend was stung by a bee during the process.)

Initially, Clark intended to rent a tent from Walt Disney World Resort. But no Disney Cast Member could give her a clear answer on where to find said tents – Yahoo! News could not reach Disney for comment.

“I called the number and was on hold for an hour. I then reached a cast member who said they don’t believe Disney has tent rentals, then transferred me to a different line. After 30 more minutes of being on hold, another cast member told me Disney doesn’t do tent rentals,” Clark wrote.

Unfortunately, the tent was only the beginning of Clark’s struggles. “When it came time to blow up the air mattress, we realized that we pitched the tent too far away from the electrical outlets,” she wrote. “Since it was my first time camping, I didn’t think about the importance of the location where we pitched our tent because I was just eager to get it up.”

Another Guest loaned Clark an extension cord, which they used to inflate their air mattress. They soon realized that the queen mattress barely fit inside the four-person tent, which they intended to house three people.

“It was a very tight squeeze that didn’t allow us enough room to store the rest of the stuff we’d brought with us,” Clark explained. “We kept the rest of our things on the picnic table and in the trunk of the car.”

Clark also reviewed the comfort station, which was close to her campsite. She chose not to use the showers but said it was nice to have a clean place to refresh nearby. At nighttime, though, it spooked the group to walk the distance in the dark, and they chose to stay together for safety.

One of the most significant downsides for Clark was transferring buses to get to the Disney Parks and Disney Springs. Though Magic Kingdom was a short ten-minute bus ride away, they had to wait at a bus stop nearby their campsite to take them to the main bus terminal.

“Though we weren’t in any kind of rush, it was still bothersome to have to transfer so much,” Clark wrote. “…The internal-bus system was also confusing to us because there were multiple buses labeled with different colors to reflect their routes.”

Clark enjoyed food from Roaring Fork and Geyser Point at Wilderness Lodge, which shares a bus with Fort Wilderness. She ended her first day enjoying a movie in her tent as Disney provides free Wi-Fi for campground Guests.

“The WiFi was a bit spottier on our campsite than in common areas nearby, but it still got the job done,” Clark wrote.

The next day, Clark and her party explored Disney’s Fort Wilderness Resort. They rented a golf cart for $67, surprised at the low price and the included souvenir magnet.

“Buying a gift at a Disney gift shop could cost a pretty penny, so I was glad the resort gave us a complimentary magnet with our rental to remember our trip,” Clark explained. She was also grateful for the detailed instructions on driving the cart.

Using the golf cart, Clark visited the dog Park, pool, and areas with paid activities like archery, fishing, and bike rentals. Clark was impressed by the water slide and comfortable chairs at the pool. She was disappointed that towels weren’t provided.

Clark also stopped by P & J’s Southern Takeout, a Quick-Service restaurant she said was of higher quality than most. Later, her party enjoyed 30 minutes of solo time with Chip and Dale at Chip ‘n’ Dale’s Campfire Sing-A-Long.

Unfortunately, it started to rain. Clark’s party struggled to drive their golf cart and wished it had more protection from the rain. (It’s important to note that an additional plastic shield can be pulled up in the rain, visible in Clark’s photo).

“When we went to go check the tent, we realized neither of us zippered the door shut,” Clark recalled. “The tent’s rainfly did its job repelling water as only the Chip ‘n’ Dale blanket was damp. Other than that, our bed, pillows, and extra blanket were mostly dry, which we were thankful for.”

In the morning, Clark noticed a bit of water leaking in the corners of the tent. (To avoid this, keep any personal belongings away from the wall of your tent when it rains.)

It was this Guest’s first time camping and likely her last. Clark paid $92 per night for her weekend stay, totaling $207 after taxes and fees. Though that’s cheaper than a night at a Value Resort hotel (starting at $119/night), Clark said the equipment cost made it more expensive.

“Though I mostly enjoyed my time camping — especially because I was with my sister and friend – I would never do it again,” Clark wrote.

“Camping might be a cost-effective option for those who have equipment already, but I spent $313 on supplies — tent, air mattress, sheets, lantern, mosquito-repelling supplies — in addition to the $207 fee for my campsite,” she continued. “I also spent $67 to rent a golf cart, which ended up being essential for getting around.”

Clark enjoyed her experience but didn’t want to work so hard on vacation. “I enjoyed the grounds and all of the amenities the resort provided for guests, but when I am visiting Disney on vacation, I like to relax. I found camping to be far from relaxing, and filled with mosquitoes,” she wrote.

“I would much rather pay a bit more to stay in one of Disney’s value resorts for a more pleasurable experience,” Clark concluded.

Have you ever camped at Walt Disney World Resort?