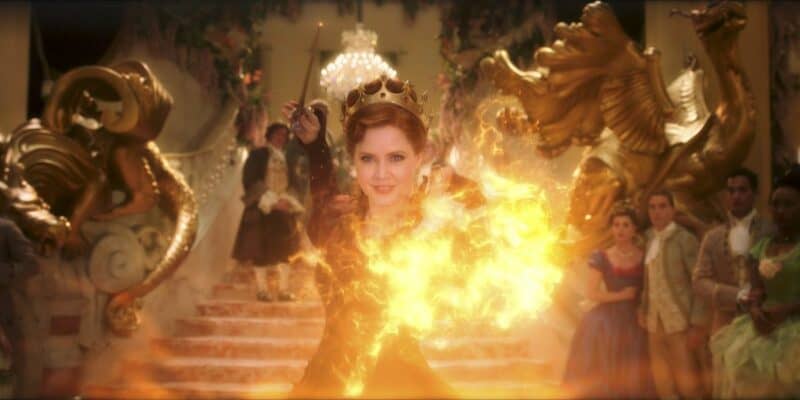 Fifteen years after Disney brought their animated magic to the real world with Enchanted (2007), Princess Giselle (Amy Adams) is back. Her Happy Ever After in the big city has grown stale, and so she uproots from New York and moves to the rural cottagecore paradise of Monroeville with husband Robert (Patrick Dempsey), stepdaughter Morgan (Gabriella Baldacchino) and their baby Sofia.

But Suburbia, ruled over by local queen bee Malvina Monroe (Maya Rudolph) fails to give Giselle the bliss she is seeking. So she taps into the magic of her realm of Andalasia, thanks to a magic wand, and wishes for a ‘fairytale life’.

But that life brings with it both all the wonder of a storybook, and the villainy. Malvina is transformed into the resident evil queen and Giselle begins to notice her own character shift, as she starts to embody the role of a Wicked Stepmother.

Enchanted (2007) is, I think, overlooked for how creative it could be, and for tapping into the comedy chops of Amy Adams and stars like James Marsden (who returns in a smaller role here) to showcase all the camp fun of a Disney musical.

Disenchanted (2022) flips the formula, instead imagining what life could look like if it was transformed into a fairytale realm itself.

There’s some fun references to Disney classics, from Ariel in the Little Mermaid statues to candle shops named after Lumiere. And Monroelasia, as the fairytale version of the suburbs is known, does gleam with fairy dust and all the tropes you’d expect to see from a fantasy land (no pun intended).

The cast each get to showcase their vocal chops with musical numbers littered throughout, some more memorable than others — but a clear standout is a showdown between Amy Adams and Maya Rudolph, where the pair get to embrace melodramatic villainy to entertaining effect.

In fact, the film could have benefited from leaning into those moments more; Rudolph is clearly having fun when she can play up the part of the evil queen, but feels a little under-utilised, her role perhaps trimmed in favour of a plot line around Morgan overcoming her worst teenage qualities and trying to adapt to life in the countryside.

It’s all a very low-demand affair, and while that can be appealing, it does impact the overall movie. It might be it’s streaming-only debut, but it feels low investment, with some of Enchanted’s original magic lost as setpieces remain largely within the confines of Monroelasia and perhaps lacking in some of the scale of its predecessor’s stand out moments, such as the ‘That’s How You Know’ sequence in Central Park.

Disenchanted is an inoffensive follow up to its disarmingly charming and meta predecessor, with a game cast embracing a return to the camp fun but a smaller scope losing a little of the usual Disney film magic along the way.