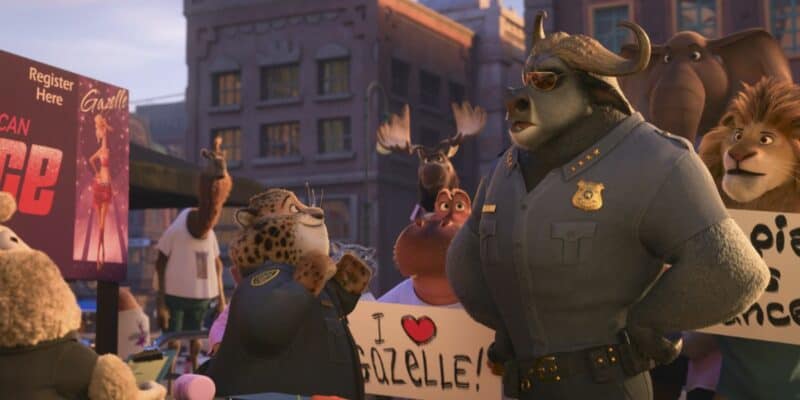 This episode of Zootopia+ sees us return to a Zootopia (2016) favorite, Clawhauser (Nate Torrence). Keen to meet his superstar Gazelle (Shakira), he enters a talent competition inspired by So You Think You Can Dance?.

The short opens introducing Zootopia’s biggest talent competition. On the judging panel are Sir Whiskers, Kitty Claws, DJ Stripes, and Gazelle, who we last saw slaying the stage with the hit song “Try Anything” (do you think she feels uncomfortable being the only prey on a panel full of natural predators?).

They introduce a special prize, for the winner to join Gazelle on stage as a backup dancer — but entrants have to come with a partner. At the police HQ, Clawhauser squeals in delight, and immediately puts out a call for backup.

Related: Zootopia Franchise Gets Its Own Spinoff

At the filming, Chief Bogo (Idris Elba) arrives to support Clawhauser, who tells him he needs backup for Gazelle. Bogo takes this as a plot on the superstar singer’s life and gets fully on board with the protection detail, donning the full fur and face paint. “I look… stunning!” he utters.

Just before they take to the stage, Clawhauser confesses that this has been a ruse all along to try and win the show and achieve his dream with Gazelle. Bogo says he has been insubordinate but Clawhauser says Bogo is the only one who responded to his appeal for help.

Clawhauser takes to the stage solo, with Bogo refusing to join him. He is almost buzzed off, and Bogo storms out of the exit. As security arrives to take Clawhauser off stage, they fall into the orchestra pit. And in a moment reminiscent of Dirty Dancing (1987), he emerges from the smoke carried aloft by the chief himself.

Chief Bogo says he can never leave backup behind as the pair put on a spectacular aerial routine, winning applause and personal congratulations from Gazelle. With that, Clawhauser promptly wakes up: it was all a dream inspired by the Gazelle app, which lets you upload your face to one of her dancers.

He rushes into Chief Bogo’s office and catches him on the app too, delighted to have found another Gazelle fan.

Did you like this Gazelle-centric episode? Let us know in the comments.