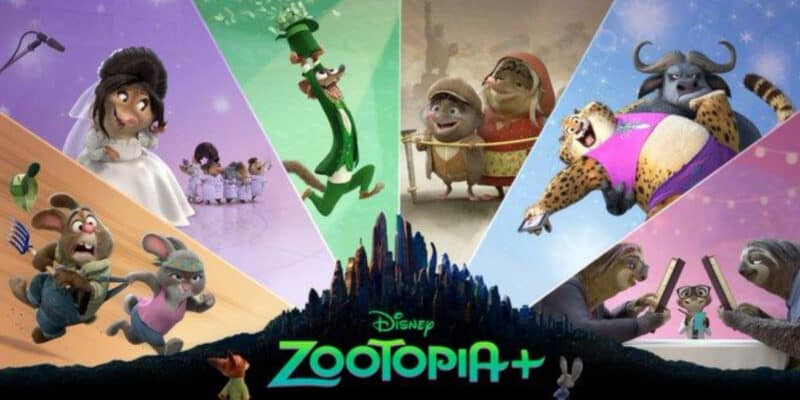 Fans were given a roundtrip ticket through the six districts of Zootopia with the introduction of Zootopia+ on the company’s streaming service. Viewers are presented with six episodes surrounding some of their favorite furry friends and all their animal antics, but how does the show measure up compared to its inspiration? Does Zootopia work as an animated series?

Are these supporting characters from the film worthy of their own spinoff? The answers to those questions and more lie in the urban jungle of this Disney+ original. 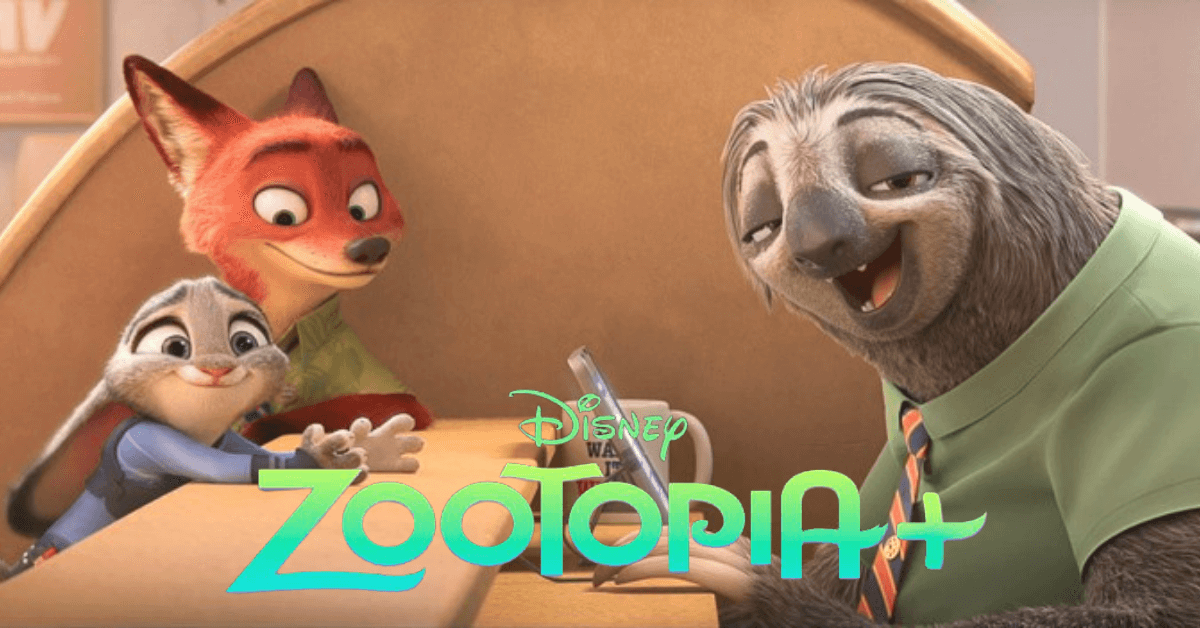 Right from the opening seconds of the first episode, viewers are hit with a rumbling swing number reminiscent of Michael Giacchino’s score from the original film. Pair that with the stylish art-deco-animated intro and it makes for what should become one of the most delightful opening sequences from a Disney+ original.

The animation of the shorts themselves is as clear and crisp as the original film, showing that Disney did not slack off on the art and design budget. The characters and environments are still just as vibrant and lovely as they were in the film, and the dedication to bringing the city of Zootopia to life is still keenly felt. What really matters at this point in the game is how the stories, environment, and characters all interact to get this show on the road.

Since the series itself is divided into six different episodes concerning the lives and (mis)adventures of Zootopia’s animal populace, it only feels fair to discuss each chapter individually. It should be noted that while each episode will be examined separately, fans can rest easily knowing that the series as a whole is as infectious and delightful as Gazelle’s hit single. Viewers looking for a return to one of Disney’s most enchanting worlds won’t be disappointed on that factor, and there’s certainly nothing wrong with visiting an old friend. However, in order to thoroughly study what viewers are in for, we have to look at each episode as its own entity before a consensus can be reached.

The series comes out swinging with a fast-paced chase scene featuring Stu and Bonnie Hopps. When one of their 275 offspring stows away on board the Zootopia express seen in the beginning of the feature film, the carrot-farming couple has to hop into action to get their baby back.

The episode does exactly what a premiere chapter should do by getting the audience hyped and maintaining that momentum as the plot progresses. Plus, Disney was kind enough to really lay on the easter eggs in the series debut episode. Viewers can spot several character cameos, including Gideon Grey, Yax, and even an appearance from Nick and Finnick preparing their popsicle hustle.  The icing on the cake, however, is how incredibly well Bonnie and Stu play off each other when they are forced out of their comfort zones and into the roles of action heroes.

The Real Rodents of Little Rodentia

Easily one of the funniest episodes in the series, this parody of The Real Housewives/Jersey Shore is an absolute riot. As Fru Fru prepares for her wedding with the rest of her rodent gal pals, her party is suddenly crashed by her cousin, Tru Tru. What transpires is a hilarious take on Say Yes To The Dress on a Little-Rodentia-sized scale. These girls might not be big, but the laughs certainly are. As Tru Tru’s good intentions start walking on the bride’s boundaries, tempers and tensions increase until a certain giant donut grants Fru Fru a little perspective. Without going into spoilers, the end scene with the dress and the bouquet is the highlight of the episode.

The award for most easter eggs in a single episode has to go to the third entry in this animated series. It’s a mammalian musical starring that duke of bootlegs, Duke Weasleton with a purely Disney song sequence. It’s not exactly Hamilton, but a mad amount of applause has to be given to Alan Tudyk as he gives Duke a surprisingly infectious and delightful musical number about turning his life around and hitting “the big time.” It’s amazing what the right perspective can do to a feature film’s side character, and that’s precisely what this mini musical provides as Duke is taken on an inspirational musical fantasy as he pulls himself up from a rubbish heap and into a delightful song and dance routine. Of course, reality has to come crashing in eventually, but that doesn’t mean the little crook is down and out.

Godfather of the Bride

While the title design might allude to a parody of Francis Ford Coppola’s Godfather series, but this origin story for Zootopia’s miniature mafioso, Mr. Big, is an unexpectedly heartwarming flashback to his Grandmama’s bakery with an appropriately comedic tone as Disney proves that they can still make some of the best slapstick in the animation business. While it’s only a few minutes long, it’s easily the most cinematic episode in the entire series. The use of color and cinematography is incredibly creative, as is its storytelling. The episode not only explores the character of Mr. Big, but the founding of Little Rodentia as well. By doing this, the series contributes to Zootopia’s world building tremendously. Mr. Big himself might come off as Marlon Brando in miniature (thanks to Maurice LaMarche’s incomparable vocal performance), but he’s not exactly the ruthless mobster he was painted as in the original film. Still, he did break his promise to Fru Fru about icing guests at her wedding.

So You Think You Can Prance

If there’s one thing viewers can take away from Clawhauser other than his insatiable love for donuts and his pleasantly plump exterior, it’s his love for that angel with horns cosplaying as Shakira, Gazelle. When he lures Chief Bogo into an audition for Gazelle’s dance competition under false pretenses, his opportunity to meet his favorite pop star gets put on the line. A pair of tight pants and some body paint later, Bogo and Clawhauser have to dance their hearts out to impress Gazelle and her panel of judges. In all honesty, the liar-revealed plot line is one of the most overplayed cards in the deck, especially by Disney. However, the pairing of two of Zootopia’s finest officers does lead to some delightfully comedic antics. That being said, some viewers might consider this the weakest episode in the season.

It’s amazing what Disney can do with a single joke stretched out across an entire episode, but the dinner date between Flash and Pricilla can best be described as “excruciatingly funny.” Where the first episode was fast-paced and frenzied, the final episode brilliantly contrasts with its sloth-like speed and pacing. As super server Sam has to rush her shift in order to make it to Gazelle’s concert. All goes according to plan and ahead of schedule until a certain pair of sloths have a dinner reservation that brings Sam’s marvelous momentum to a grinding halt. While the little otter’s plight is undoubtedly infuriating, Flash and Priscilla are the absolute stars of this episode. They might not be quick with their wits, but their expressions, movements, delivery, and reactions genuinely steal the show. The episode’s ending makes for a near-perfect point to punctuate this entertaining series, and it will have some viewers clawing and craving more.

Fans expecting a fully-connected series might be a smidge let down as Zootopia+ presents itself as more of an anthology tie-in to the original film. That doesn’t make it a lousy project, but it might leave some viewers wanting, depending on their expectations for the show. What viewers can expect, however, is a delightfully colorful romp through Zootopia’s urban jungles and various environments filled to the brim with a cast of lovable animal friends. At the same time, Nick Wilde and Judy Hopps get a backseat so the film’s supporting cast can have their time in the spotlight. It’s not precisely the follow-up to the movie that most fans probably expected, but it’s still a delightful return to one of Disney’s most charming fictional worlds.

The episodes range from fast-paced and funny to wholesome and heartwarming, and there are easter eggs galore for those die-hard Disney fans to pick out one by one. Is this the Zootopia spinoff that the teasers hinted? Not in so many words. Is it a great sampling of what the studio could do with further exploration in this fictional world? Absolutely. Are fans of the original movie going to be satisfied with this offering? Undeniably yes. The series does indeed deliver a return to Zootopia with all the bells and whistles fans of the flick could have expected and then some. While brevity is indeed the soul of wit, this animated anthology of anthropomorphic animals is a pleasure to watch and rewatch over again. Hopefully, this series is only an appetizer at more fun to come from the streets of the city’s Downtown District. At any rate, it definitely deserves a second season for even more fun with the the film’s furry friends. At any rate, it’s an animated series Disney fans can binge watch with the greatest of ease.

What did you think of Zootopia+? Tell us in the comments below!