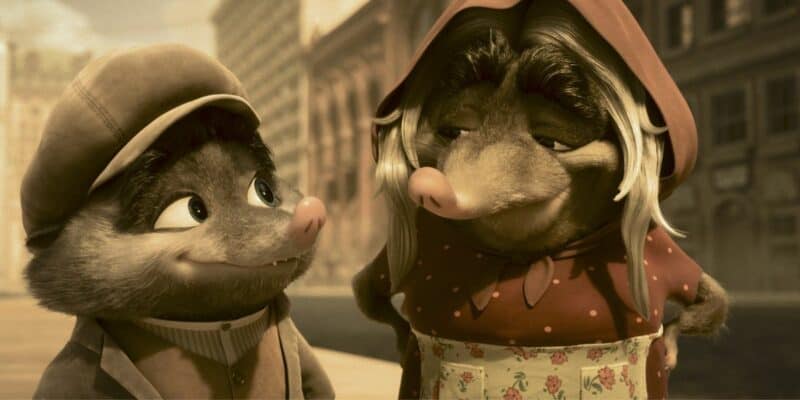 This fourth episode of Zootopia+ takes inspiration from the cinematic classic The Godfather (1972) for a tale of rodents looking to make it in the big city.

The episode opens on Fru Fru’s (Leah Latham) wedding, continuing the story we saw in episode two. As Cousin Morty gets gregarious on the cheese offering, Mr. Big (Maurice LaMarche) begins his wedding toast: a trip back to his arrival in Zootopia.

With sepia-toned footage, we see Mr. Big and his family leaving “the old country” on a floating tire for the big smoke. When they arrive, they discover Zootopia wasn’t made for everyone: the shrews and other small animals have to carve out a life where they can, hiding in crevices and cracks and making homes out of shoe boxes.

They turn an old box into a home, and Grandmama transforms the kitchen into a bakery. Mr. Big is her delivery boy, dodging the larger animals to take fresh cannolis to customers. His work leads him to stumble upon the criminal underworld, with a Rhino crime boss (Imari Williams).

Grandmama has bought Mr. Big a bike to make his work a little easier, and he puts it to good use, alongside making friends with those in need — including buying some sweltering polar bears ice creams. The bears begin to work with him and all looks bright until the Rhino Boss spies their success.

He and his thugs arrive to rob Grandmama and make sure they know “their place in the world”.

Mr. Big won’t stand for it and stands up to him, demanding he stops threatening him and his friends. Rhino, incensed, charges at him — but Mr. Big calls ‘ice him’ and with the help of his family and crew, manages to send the rhino tumbling into an ice factory.

From there, we see him grow his business and build a place for the smaller animals in the world, a place that will become Little Rodentia.

What did you think of episode four of Zootopia+? Let us know in the comments down below!