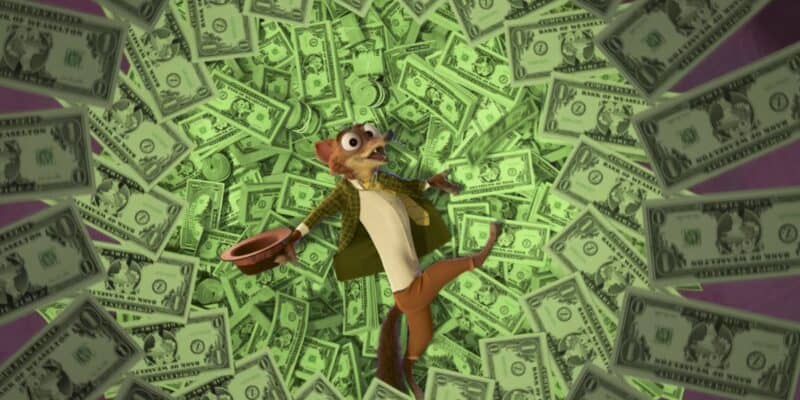 The third episode of Zootopia+, “Duke the Musical”, takes its lead from big Hollywood musicals to transform a critical juncture in the life of a small-time thief into a showstopping musical number.

The episode opens on Duke (Alan Tudyk) fresh from jail, convinced of his notoriety as a player on the Zootopia criminal scene. But news reports dismissing and ridiculing him for his capture in a giant donut (a throwback to the donut seen in last episode that almost killed Fru Fru).

His crisis of confidence leads him down an alley to contemplate his life, whereupon the orchestra strikes up and we find ourselves in the short’s main attraction, musical number “Big Time”. After pickpocketing an elderly goat, Duke begins to envision bigger for himself.

First, he imagines life as a used car dealer, scamming customers out of their cash with duff motors. The he spins a wheel and contemplates becoming a lawyer; a surgeon; a writer. All of which involve him deceiving or robbing Zootopians of their cash in some way, part of his journey to the ‘big time, from small time to big time”.

Related: Recap: ‘Zootopia+’ Episode One “Hopp On Board”

He wants to be the ‘Weasel of Wall Street’. In a fun moment, there’s an ad for him selling counterfeit movies, including art referencing other Disney Animation Studios’ movies like Big Hero 6 but with the obligatory Zootopia twist.

At the peak of his delusion, he languishes atop a pile of cash — but then paws push through and pull him down, ethereal voices chastising him for robbing them of their money.

Could this be a moment of morality for the weasel? He thinks about ‘straightening up’, and back, in reality, looks to return the cash to the goat he pickpocketed at the start. As he reaches out with the money on the road crossing, the moment is cut short by the goat being hit by a money truck, which promptly crashes into a lamppost.

As the goat croaks that it is okay, Duke looks at the rear of the truck, spotting bags of vulnerable cash waiting. He doesn’t fret over the decision for long, diving into the money and sprinting off into the distance with the police giving chase. Once a weasel, always a weasel.

Did you enjoy the musical number in this short? Let us know below.