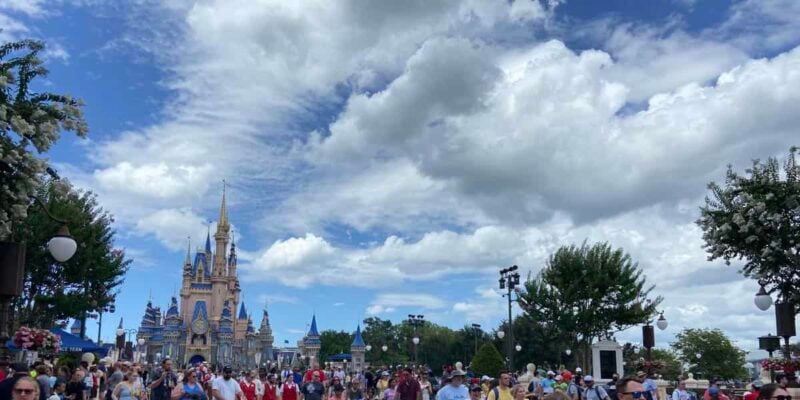 The Walt Disney World Resort parks were crowded today, starting early in the morning, with no understanding at first as to why. As far as Guests knew, it was just randomly crowded at the Parks for a Monday morning.

While there might not have been an obvious reason for the number of Parks Guests at first, some commenters on social media pointed out a few good explanations for the seemingly random group of crowds.

Two TikTok videos this morning shared different experiences and perspectives of the crowds at Disney World at different Parks, and the posters were confused as to what could be behind this.

The first video comes from @walruscarp, who noticed large crowd sizes at EPCOT:

And the second video from @magicbandsandtrashcans shows a long line of cars waiting to get into the Magic Kingdom parking lot at 7:50 a.m.:

Commenters on both these videos explained a few good reasons why the Parks would be crowded on a Monday of all days. The first, and most likely explanation, is that it is Jersey Week, which is a term for the New Jersey Education Association (NJEA) Convention.

This convention usually takes place in the first or second week of November, when schools will close down. While some schools mostly close on the Thursday or Friday of that week, others have the entire week off. When this happens, it’s a good opportunity for New Jersey families to take advantage of this time and venture down to Florida for a trip to Disney World.

The second explanation was that this past weekend, Disney hosted the Wine & Dine Half Marathon Weekend. Commenters on these videos who were at the event explained that it was packed as well. Though the half marathon is officially over, it would make sense that the participants would stick around a bit longer to enjoy themselves at the park and make it a long weekend.

The third potential explanation was that Boyz II Men were performing from November 4-7 at EPCOT’s Eat to the Beat Concert Series as part of EPCOT’s International Food & Wine Festival.

And there you have it! The most likely cause for this explosive number of visitors is likely due to Jersey Week, along with other schools across the country going into fall break. Regardless, be prepared if you’re planning to visit Disney World this week, as it will definitely be crowded, maybe even worse toward the end of the week. And with Thanksgiving and the holidays right around the corner, crowd sizes might be just as large around that time.

Have you ever heard of Jersey Week or been to Disney World during this week? Was it crowded? Tell us in the comments!