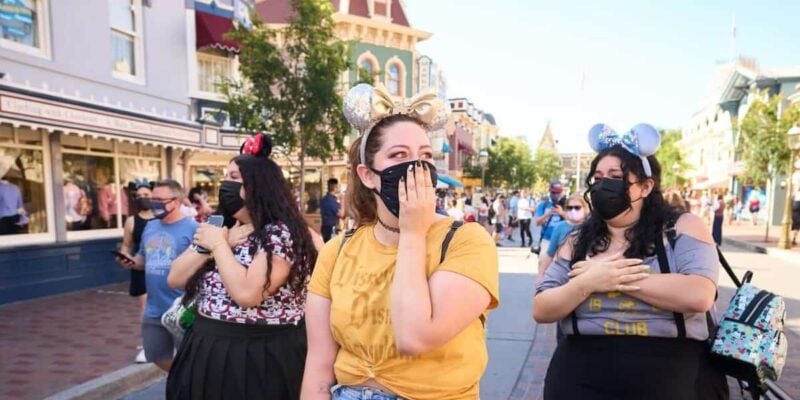 Going to the Disney Parks can be a magical adventure, but sometimes dealing with or being around other Guests can be a not-so-magical experience.

This is especially true this time of year when people are sick and spread viruses around the Parks. Guests have reported catching colds, the flu, and COVID in recent days after visiting the Parks, as there are reportedly a larger number of Guests who go to Disney while sick.

But why does this happen? Why are sick people still showing up to the Parks? A recent Reddit thread might give us a better explanation.

Related: Do You Have “Horrible Luck With Kids Getting Sick” at Disney World? You’re Not Alone!

User jetpackswasyesV2 shared what they noticed on a recent visit to Disneyland:

With RSV being a major concern, I can’t believe how many people have their kids at the park while they’re hacking all over the place. Just watched a family with a very obviously sick child board the monorail. Ugh 🤦🏻‍♂️

Other Disney fans had a lot to say on this topic in the comments, as this was something that they’ve directly experienced at the Disney Parks in recent days.

For example, user DDotJ shared how they protected themselves amid other Guests who were sick:

I was at the park yesterday and wore an N95 around all day. But I would be in line and people would turn around and directly cough on me. I noticed a lot of sick people at the parks. Not just a light residual cough but full on hacking and sneezing, with runny noses.

I’ve been to the parks many times over the past few months but I felt like it was a lot worse yesterday. It’s RSV, Flu, and Covid season so it makes sense.

I wish Disney would reinstall a lot of the hand sanitizer stations at ride exits. Especially after touching the ride vehicles, I always try to sanitize my hands. There are still many but a lot of them were empty, and a lot of them have been removed.

Related: Dumbo Vomits In Front of Guests Due to Heat Exhaustion

Some Guests, however, were not as fortunate. User Lavender_Daedra shared how they became sick even after taking certain precautions at the Parks:

I ended up catching Covid from my trip to Disney just a few weeks ago. Managed to avoid it for almost 3-years and had even traveled previously without issue. I went thru a lot of sanitizer but the amount of children turning and coughing directly onto people isn’t stopped by hand sanitizer.

Per the comments section, there are several reasons why Guests may attend the Park while sick. The main reason is inconvenience. While some people are local to the area and might have an easier time rescheduling their Park reservation, others who are flying in from around the country might not have that luxury.

Some Guests said that it’s not just the Park tickets and reservations that are the issue, though. Other factors play a part as well, such as hotels, airlines, and even requested time off from work that aren’t as easy to cancel or reschedule.

So while it’s not courteous or kind of Guests to come to the Parks while sick, these are just some potential explanations as to why most Guests do. Other commenters expressed that Guests who are sick can be selfish and entitled, as the ones that these commenters encountered were not wearing masks and were openly coughing and touching surfaces.

Even Cast Members joined in on the conversation, confirming that COVID case numbers are on the rise, not just at the Parks, but among Cast Members as well. Cast Members have a strict policy about calling out sick, which means they may have to work while sick in order to keep their jobs.

The main takeaway here is to do your best to stay home when you’re sick to avoid spreading sickness to other Guests, some of whom may be immunocompromised. And if you are at the Parks and feeling unwell, consider wearing a mask to help prevent the spread of germs. At the very least, be sure to cover your mouth and nose when you cough and sneeze.

And for all Guests visiting the Parks, especially during cold and flu season, make sure to wash your hands often and use hand sanitizer, especially after a ride, before you eat, or if you touch a lot of merch at the shops. It’s not a bad idea to stay hydrated or consume more vitamin C as well. These helpful tips can keep everyone happy and healthy and prevent other Guests, especially those who are more vulnerable, from getting sick during this holiday season and throughout the year.

Have you been to the Disney Parks recently? Were there a lot of sick Guests there? Share your experience in the comments!