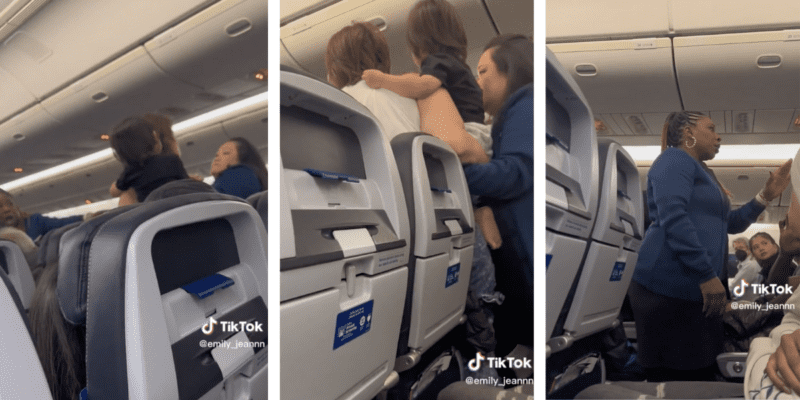 Earlier this month, we covered a viral video of a woman whose decision not to switch first-class seats with a family so they could sit together caused a confrontation.

This week, another traveling conflict went viral. But this time between a passenger and a flight attendant. Emily (@emily_jeannn) shared a video taken on her redeye flight from San Francisco to Chicago:

“I will kill you,” a woman holding a child repeatedly threatened as she appeared to choke a United Airlines flight attendant, who we later learn is named Sarah.

“You need to take a seat,” another flight attendant said, attempting to intervene. “Ma’am, we are landing.”

Then, the flight attendant instructed Sarah to step back, likely for her own safety. The passenger randomly argued that she “smelled alcohol,” and the attendant responded, “It doesn’t matter what you smell. You’re out of line.”

The video ended there, but Emily returned later to explain what happened in another video:

Emily said the passenger acted strange the entire flight, yelling “some gibberish things” and talking about Jesus Christ coming to save the other passengers. But she had previously remained in her seat.

The plane landed around 6 a.m. As the pilot braced for landing, they instructed all passengers to stay in their seats. At this time, the passenger picked up her child and began walking toward the restroom. Flight attendants asked her to sit down, but she wouldn’t.

Some commenters suggested the passenger may have been drunk, but Emily clarified that it was actually the unruly Guest accusing others of being under the influence.

“She was not drunk,” Emily said. “She was telling the man in my aisle that he smelled of alcohol because he did, and he was another crazy. But just not quite as crazy as her.”

Please follow all crew instructions when traveling onboard an airplane.