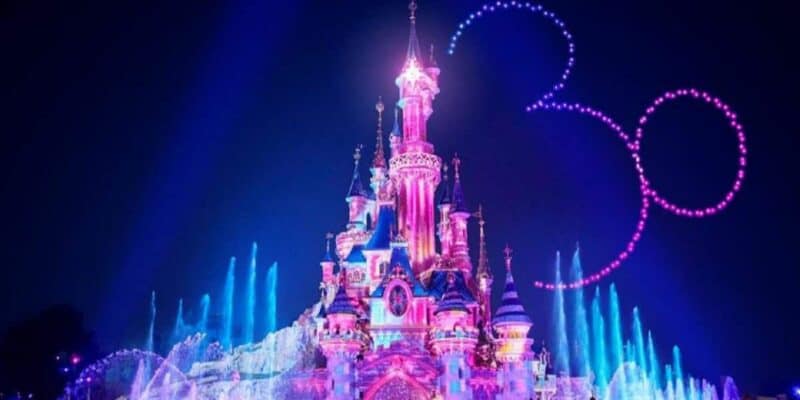 Disneyland Paris also announced in a new press release that this year also marks the 30-year anniversary of its partnership with Orange, a French and European telecommunications company.

The press release also stated that this long-standing partnership has been renewed until 2027. The goal of this initiative is to not only enhance the Guest experience at Disneyland Paris but also to bring Disney magic into Orange clients’ daily lives.

Since 1992, this partnership has helped Disneyland Paris’ millions of Guests to be able to connect with one another, as well as share their experiences from the Parks.

In the past few years alone, Disneyland Paris Guests and Orange clients have been able to enjoy new and innovative experiences that were created through this collaboration. This includes technology such as virtual reality games, augmented reality apps, and unique decor and activations within the Orange flagship locations.

This partnership will also bring more improvements to Disneyland Paris’ Wi-Fi and mobile network, not just at the Park but at the Resort as a whole. In fact, one recent enhancement that has been implemented at the Park is a collaboration between Orange and Walt Disney Imagineering, which integrated Wi-Fi hotspots within the Marvel Avengers Campus.

Here’s what Laure Albouy, Vice President Business Strategy & Integration for Disneyland Paris, had to say about the future of this collaborative work with Orange:

“More than ever, Disneyland Paris is looking toward the future. Our partnership with Orange – a global brand committed to digital innovation and sustainability – is an excellent embodiment of our ambitions. We are excited to further a collaboration that has benefited our Guests and Cast Members over the last 30 years, with even more opportunities to come.”

More innovations have come about as a direct result of this collaboration. Disneyland Paris’ storytelling abilities, partnered with Orange’s technical aptitude, continually bring about new and exciting digital advancements to the Park.

One such example of these digital experiences is the Celebration Quest app, which is a treasure hunt across both Parks: Disneyland Park and Walt Disney Studios Park. This hunt contains at least 30 puzzles to help Guests find secrets and surprises around the Park, and more than 60,000 Guests have participated in this quest to date.

Another example of these collaborative digital experiences is The Lost Artifact, which is an augmented reality app that helped 15,000 Guests see Disney’s Hotel New York – The Art of Marvel from a different perspective.

Gaëlle Le Vu, Director of Communications and CSR at Orange France also shared some thoughts on the partnership with Disneyland Paris:

“We are delighted to continue to partner with Disneyland Paris, sharing our expertise and know-how to help make the experience even better for guests across the resort.”

The future of this partnership is bright. There are already several innovative experiences in play to offer French and European consumers the opportunity to have everyday magical experiences. And, this partnership will continue to move forward, to keep improving Wi-Fi and 5G networks across the Disneyland Paris Resort.

What do you think about Disneyland Paris and Orange’s continued partnership? What kind of improvements do you think we’ll see in the near future? Share your thoughts below!