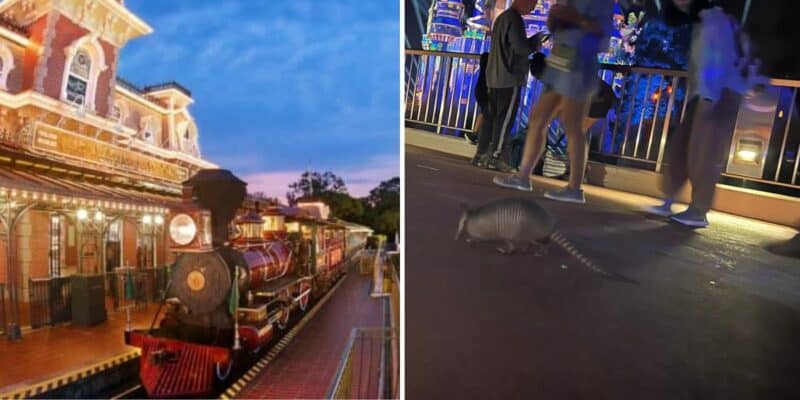 At Walt Disney World, specifically in the Magic Kingdom, Guests have the opportunity to enjoy attractions like Pirates of the Caribbean, Peter Pan’s Flight, “it’s a small world”, and of course, the Haunted Mansion. However, Guests looking to see live animals may not even need to visit Animal Kingdom to do so.

Florida is of course, known for its alligators, and Guests have actually witnessed a few make their way into the Parks. Ducks can also be seen strolling through the streets of Hollywood Studios or Magic Kingdom on any given day. But sometimes, a creature emerges in Disney that you previously thought would never show up in the Parks.

A tweet went viral yesterday showing a very peculiar “Guest” visiting Walt Disney World. You can see the photo below:

There’s a armadillo casually walking across the Fantasyland bridge

There’s a armadillo casually walking across the Fantasyland bridge pic.twitter.com/26VGgBInIo

As you can see, a live armadillo took over Magic Kingdom, making its way across the Fantasyland bridge. Spotting animals is actually quite a common occurrence at “The Most Magical Place on Earth.” Residing on what essentially used to be swamp land, Walt Disney World is home to some cuddly and not-so-cuddly creatures.

In the past, Guests have spotted everything from snakes and alligators to ducks and even cats. And speaking of cats, there is an entire section of the Disney fandom devoted to keeping an eye on the cats that live near and in Disneyland.

The cats that roam the Resort have become somewhat of a Disney Parks legend, with some Guests seeking out the animals, most of which have been given names. Disney does urge its Guests not to interact with the animals, but with so many in the Park, it’s bound to happen.

Have you ever spotted a wild animal walking around Walt Disney World?