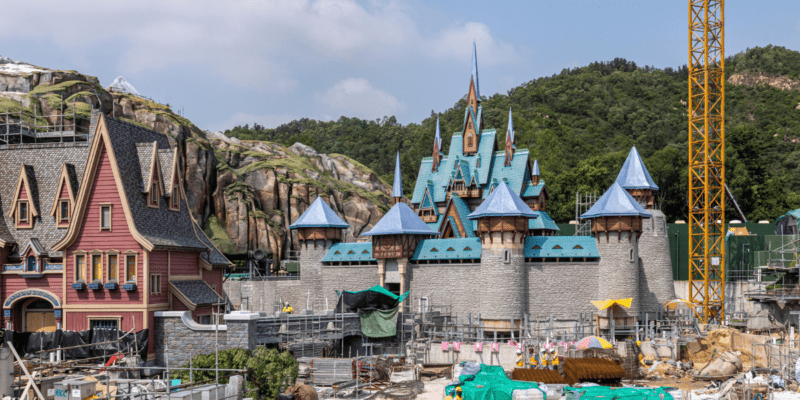 Disney Parks are some of the most magical places to visit on earth.

Whether you’re visiting Walt Disney World Resort or Disneyland Resort domestically, or taking a trip internationally to destinations like Disneyland Paris, Hong Kong Disneyland, Tokyo Disneyland, or Shanghai Disneyland, you’re sure to have a magical time.

As Disney continues to expand its Parks all across the world, one of the most highly-anticipated construction projects currently underway is Arendelle at both Hong Kong Disneyland and Disneyland Paris.

The expansion at Hong Kong Disneyland got underway back in 2016 and we learned that the new area will open in the “second half of 2023,” as stated by Josh D’Amaro, Chairperson of Walt Disney Parks and Resorts at Disney’s D23.

Now, the newest castle to grace Disney Parks is near completion, and Disney just shared some sneak peek images on social media.

Hoo-hoo Are you ready for an un-brrr-lievable #FirstLookFromHKDL of #WorldofFrozen? Opening next year at Hong Kong Disneyland, Arendelle Castle is coming to life and will soon be topped off with icy ornamentation. Stay tuned for more sneak peeks!

Hoo-hoo 👋 Are you ready for an un-brrr-lievable #FirstLookFromHKDL of #WorldofFrozen? ❄️ Opening next year at Hong Kong Disneyland, Arendelle Castle is coming to life and will soon be topped off with icy ornamentation. Stay tuned for more sneak peeks! pic.twitter.com/GvNdAC9yad

The new “Frozen” area will feature a one-of-a-kind coaster called Wandering Oaken’s Sliding Sleighs that will take Guests on a winding journey through Arendelle. Each experience on Wandering Oaken’s Sliding Sleighs begins when you visit Oaken’s infamous store. Then, Olaf and Sven help pull your sled to the top of the lift before sending you on your way.

As mentioned above, while Hong Kong Disneyland is leading the way for the arrival of the Kingdom of Arendelle to Disney Parks Worldwide, Disneyland Paris is currently developing its own expansion inspired by the hit Disney film Frozen, as well.

While there is no Arendelle to visit in the U.S., Guests can enjoy Frozen Ever After at EPCOT in Walt Disney World Resort.

What do you think of the Frozen-themed land? Let us know in the comments!