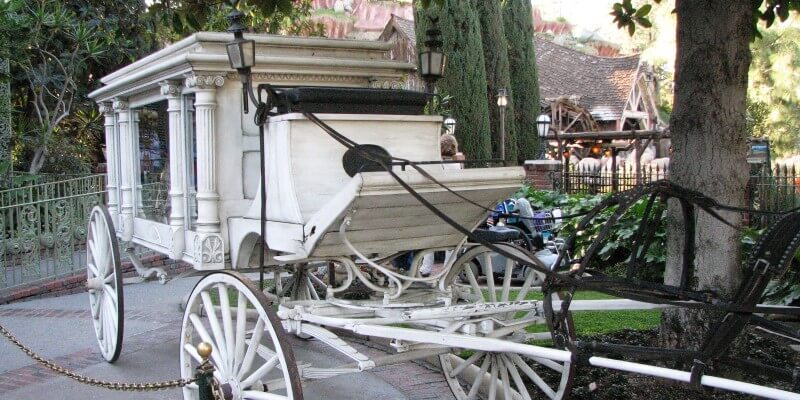 There are several spooky set pieces, props, and dressings when it comes to Disney’s Haunted Mansion, regardless of which Parks they might inhabit.

Once guests pass the gates of Gracey Manor, they take their first steps into the boundless realm of the supernatural and expose their sympathetic vibrations to the 999 Happy Haunts. Since Disney Parks are dedicated to immersive experiences, the spooky fun begins well before the visitors even set foot inside the mansion itself, and one of the first recognizable fixtures on the grounds is the horseless hearse seen in both Disneyland and Walt Disney World.

If a guest approaches the hearse, they will hear the ghostly neighing of invisible horses as they make their way through the ride queue. What some fans might not realize is that both are real antique funeral vehicles, and the one seen in Disneyland has something of a history regarding its previous usage inside and outside of Disney property.

There are several creepy tales regarding the Haunted Mansion, including one claiming that the ghost of Walt Disney became its 1000th Happy Haunt or that the spell-book on Madame Leota’s is an actual relic from the Salem Witch Trials, but the horseless hearse comes with a little more weight as its origins involve two very real historical figures who were said to have lain in the hearse’s casket. Of course, both are urban legends and have little to no evidence, but that only seems all the more appropriate for an attraction like the Haunted Mansion.

The more popular legend states that the white hearse was actually owned by Brigham Young, former governor of Utah and one of the founders of the Church of Jesus Christ of Latter-day Saints. According to the story, white hearses were supposedly a mormon tradition, and that the hearse brought to the mansion was the one that carried Young’s body to his final resting place in 1877. However, this myth was debunked years ago and the Brigham Young story was wiped off the table.

The lesser-known story is , far more tragic and creepy than the case of Young’s hearse, involves the mysterious death of Bobby Driscoll. Driscoll was at one time one of the premier child stars under the Walt Disney Company, having starred in films such as Treasure Island, So Dear To My Heart, Song of the South, and most famously as the voice of Peter Pan 1953. Like so many child-stars before him, Driscoll unfortunately lost the love of Hollywood when he became a teenager, losing his looks to age.

Related: Why October Is The Best Time to Visit Magic Kingdom

Driscoll’s fall from Hollywood fame was a graphic spiral that saw him bouncing around the country followed by a history of brief television appearances, divorces, drug abuse, and a supposed connection to the mob before disappearing completely. It wasn’t until his body was discovered in an abandoned building in 1968 that he was seen again. The legend states that the hearse contains not the body of Brigham Young but the bones of Bobby Driscoll,  granting him a final resting place with the studio that abandoned him years before.

Both these tales are exactly that, tall tales that give the Mansion a more haunted past, further adding to its ghoulish appeal. They are 100% false, but there’s something fun about believing in the impossible. After all, tales of ghosts and superstitions are what made Walt want to build the manor in the first place.

Do you know any Disney urban Legends? Share in the comments below!