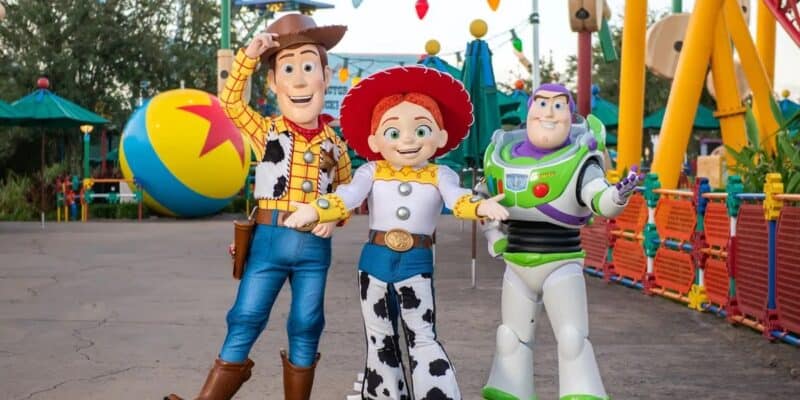 Toy Story Land is a unique land within Disney’s Hollywood Studios at Walt Disney World Resort. Here, Guests can not only imagine what it would be like to be a toy, but they will also be immersed in the world of toys, particularly Andy’s toys from the Pixar franchise Toy Story.

Besides all the themed attractions, dining, and shopping experiences available within this land, meet and greets with beloved characters Woody, Buzz Lightyear, and Jessie have returned!

Related: The Hidden Toy Story Land Detail You May Have Missed

Disney recently announced the return of these fan-favorite Pixar characters for meet and greets. Now that they’re available again, here’s what Disney had to share about this experience:

Round up the gang and get those batteries charged! Shake the snakes out of your boots and say howdy to Sheriff Woody. Yodel a hello to Jessie the Cowgirl. Remember to greet Buzz Lightyear with your best Space Ranger salute—he’s always looking for a few good toys.

These pals had some amazing adventures together, and now they’re looking forward to making new memories with you.

These three friends will be located near the Toy Story Mania attraction and will be ready to meet their fans, take pictures, and sign autographs!

You won’t want to miss out on saying “howdy!” to the film’s iconic characters. To find out when they’re available each day, check your My Disney Experience app.

After you hang out with Woody, Jessie, and Buzz Lightyear, be sure to visit the other experiences within Toy Story Land at Hollywood Studios. For example, there are several exciting attractions, like Slinky Dog Dash, a fun roller-coaster that glides over Andy’s backyard; Alien Swirling Saucers, which is a spinning attraction featuring the aliens from the film; and  Toy Story Mania, a 4D carnival-themed attraction with themed shooting galleries and games.

There is so much to do and explore within this land, especially with the addition of these special character meet and greets. Next time you visit Hollywood Studios, venture over to Toy Story Land and see the world from the perspective of a toy!

Have you ever been to Toy Story Land at Disney World? What is your favorite spot? Tell us in the comments!