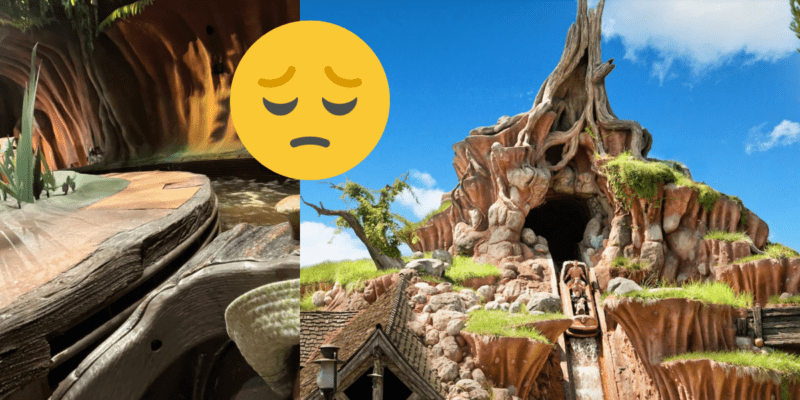 Some of the last Guests are riding Splash Mountain at Disneyland Resort ahead of its 2024 retheme to Tiana’s Bayou Adventure, inspired by Princess and the Frog (2009).

Unfortunately, many Guests report the water ride is experiencing issues with animatronics, water features, and other mechanics ahead of its imminent closure. This affected many Guests on Thursday, who ended up stranded on Splash Mountain after it broke down. Merie (@adoresring) tweeted a photo of her boat stuck on Splash Mountain:

ahhhh will be watching you play disney dreamlight valley from disneyland bcs the ride i’m on broke down and i’m stuck here 🤠 pic.twitter.com/BuaYrbjD5u

Merie replied to a YouTube video game streamer, saying that she’d been stuck on Splash Mountain for so long that she planned to watch a stream to pass the time! Thankfully, no one appears to have been injured during this Disneyland Park ride breakdown.

No closing date has been publicly announced for Splash Mountain in Frontierland at Walt Disney World Resort or Critter Country at Disneyland Resort. The Song of the South (1946) ride will remain the same at Tokyo Disneyland, though the Disney Park recently removed the ride’s anthem, “Zip-A-Dee-Doo-Dah,” from its music loop. From Disneyland:

Have you ever been stuck on Splash Mountain at Magic Kingdom or Disneyland Park?