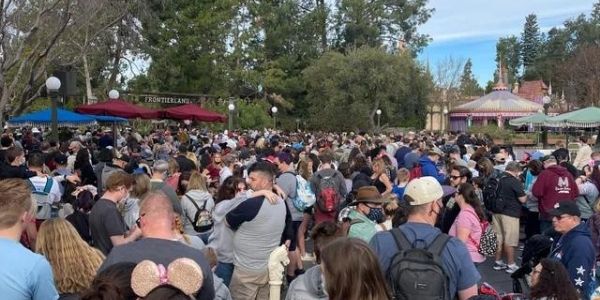 With the Halloween season coming to an end and the Christmas season right around the corner, it’s going to be pretty busy and crowded at the Disneyland Resort for the next few weeks. But what about in the new year, as the holidays are ended and the festivities are behind us? It should calm down around February, right?

Well, according to a recent TikTok by a seasoned Disneyland Guest, that doesn’t look likely, and there might not be such a thing as a “slow season” at Disneyland for the foreseeable future.

In a new Tiktok, @thedavidvaughn explains why he believes there might not be a slow season at the Disneyland Resort anymore.

The slow season at Disneyland is changing with higher crowds expected in February. Not totally surprised because this happened last year. The beginning of February should be the slowest part but we don’t know for sure #disneyland #disneyparks #disneyland#greenscreensticker

David goes on to say that the prices for the February time slots on the Disneyland reservation system are higher than they used to be. With weekends once sitting at the $104-114 price range, they are now ranging from $144-179.

Back before the pandemic shut down Park operations, other Guests would recommend February as the best time to go to the Parks, as it would tend to be slower. But this may not be the case anymore.

Related: Disney Responds to Backlash On “Pricing Out” Families

David quoted a New York Times article, which says that travel has changed because so many people now work remotely. In addition, when kids have time off from school in February for winter break, parents can take the time off to take them to the Parks. Or if they need to work, they can just leave the Park for a few hours and then rejoin their family later.

Additionally, in the same article, David pointed out that the United Airlines CEO said that travel has not slowed down like it normally does after Labor Day. David also noted it might take years before we discover what people’s travel schedules are really like.

So now, when people ask for advice on when to go, there really isn’t a good answer. Additionally, the Parks reservation system has had people choosing dates that they normally wouldn’t pick, especially with the tier and pricing system being higher on the weekends.

The commenters in this TikTok were fairly disappointed in this realization that the Parks might not have any “slow days” in the coming months. Some speculated that it could be due to larger crowds with the Disney 100th celebration in January, while others said it was due to people working from home more and realizing there is more to life than working 24/7, so they go to the Parks with their families. Others noted that there will always be crowds, and there will never be a good time to go, noting that if you want to visit the Parks, just go for it.

Have you been to the Parks recently with less of a crowd? Do you think there will still be slow days in the future? Let us know your thoughts in the comments!