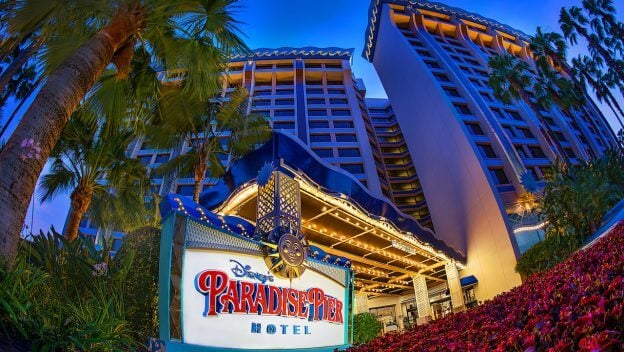 We’ve known for a while now that Paradise Pier Hotel is transforming into the Pixar Place Hotel, but Guests recently expressed dismay at the state of the hotel, including the decreased quality and amenities.

One such outcry came from @21royalstreet on Twitter, who recently Tweeted out their opinion:

I cannot stress this enough to anybody visiting Disneyland: Do not stay at Paradise Pier Hotel right now while it becomes Pixar Place. It is a disaster. No dining at all, the reception/lobby/gift shop are all currently set up in an empty ballroom, and it just in general is a dump

I cannot stress this enough to anybody visiting Disneyland: Do not stay at Paradise Pier Hotel right now while it becomes Pixar Place. It is a disaster. No dining at all, the reception/lobby/gift shop are all currently set up in an empty ballroom, and it just in general is a dump

Do not pay Disney prices for a hotel that is barely functional. Keeping this hotel during this remodel project is horrible & Disney should be ashamed. They cannot deliver on their own brand expectations, let alone basic hotel expectations for the price point.

Other Guests shared their dismay in direct response to this Tweet, including user @K_Manzone, who had this to say:

User @Sammyland6 chimed in as well:

Even @furiated hopped on the dismay train:

I would gladly pay for an upcharge event to help tear that place down.

While it’s clear that some Guests have strong negative opinions about the state of this hotel, not all is lost. Some users still have faith in the hotel and its newest construction endeavors.

I think I walked through there a few months ago and it was more or less the same, so seems like kind of slow going. The elevators now have that neat pre-programmed interface tho.

I’m a fan of the new thing now where elevators just decide which door you’re going to in advance. No more having to shuffle around having to try to predict which bay will open up first so you can beat the crowd into it.

Hey, there’s that special entrance to DCA you have access to if staying on the hotel. It’s not all bad…

Disneyland Resort anticipated Guest concerns with the hotel renovations and posted a dedicated webpage for construction updates, letting Guests know what they can expect during their stay. Disney has updated Guests so far on what they can expect regarding hotel amenities (which includes the direct entrance into Disney California Adventure Park, as mentioned previously), dining and recreation, closed sidewalks, check-in process, merchandise, ATMs, and more. All updates can be found on Disney’s construction update webpage.

Have you been to Paradise Pier Hotel while it’s under construction? What are your thoughts on this new project?