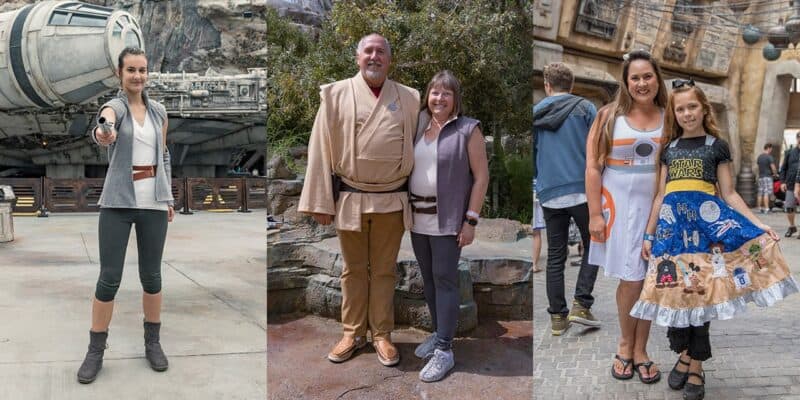 This clothing style is known as Disneybounding, a popular trend found at the Disney Parks.

Disneybounding is when you wear clothing that is inspired by Disney characters using everyday clothing and accessories found in your closet. Now, you might be thinking to yourself, “Isn’t that just cosplay?” But the answer is no- there is a difference between Disneybounding and cosplay.

Cosplay involves dressing up in an actual, more elaborate costume, which is against Disney Dress Code policy, except for at Halloween (more on that later). Additionally, cosplay is more expensive and can involve a lot of DIY activities, which can be time-consuming and draining on your bank account.

What is not as time-consuming, however, is Disneybounding, which is the opposite of cosplay. Disneybounding takes inspiration from the particular character, such as color palette and the type of look, but it ultimately reflects the style of the outfit wearer. In addition, Disneybounding is not as expensive, as you can usually create great character-inspired outfits using clothing and accesssories you might already have (especially if you’re a die-hard Disney fan).

But how did this trend start? Well, Leslie Kay, an influencer and author, is the one responsible for starting this trend with her blog DisneyBound, which has blown into a huge web presence. Leslie is also the author of the book DisneyBound: Dress Disney and Make It Fashion. Both the site and book are major inspirations for anyone who wants to go Disneybounding.

Disneybounding is a great way to express your love for a Disney movie, character, or franchise while being comfortable in your own clothing at the Parks. However, this doesn’t have to just be a Park activity. You can still be in your happy place and dressed as your favorite character, whether you’re at home, out in your neighborhood, or even hanging out with friends!

For example, if you wanted to dress similar to Ariel from The Little Mermaid, you could build off the two main colors in her mermaid attire, purple and green, to build an outfit such as a purple top and green shorts or a skirt, along with some seashell earrings or necklace.

Another example is Marie from the Aristocats. You could wear an all-white dress with pink accents, whether it’s a necklace, earrings, or a hairbow.

You could even go as Goofy, with an orange shirt, some blue pants or denim, and a green hat.

These are just some of the several inspirations found on the Disneybound website, but they are great starting points to give you a vision of how to build on an outfit idea and make something that is truly special and meaningful to you.

Basically, you would think of a character you would like to dress up as, and use the colors, patterns, or shapes that are in their outfits to inspire yours. You might go as a solo character, pair up with friends to portray a famous Disney duo or group of friends, dress up as a family, or do a cute inspired Disney couple outfit! The possibilities really are endless.

But now that you’ve got the outfit and you’re in the Park, you might want to capture the “aesthetic” of your outfit with photos for your social media accounts or just to remember the trip. If you’re dressed as a character who can be found in the Park, look on the Disneyland or My Disney Experience app to see if they’re available that day for pictures, and take a picture with them! Who doesn’t love a twin moment?

You can also try going to the location where that character’s story is told. For example, if you’re dressed as Alice from Alice in Wonderland, you can take pictures by the Mad Hatter Teacups or Alice in Wonderland attraction at Disneyland. Or if you’re Disneybounding as BB-8 and R2-D2 from Star Wars, you can snap some photos near Galaxy’s Edge.

Another route you could take is to find the paths less traveled at the Disney Parks and take some photos away from the crowd. Some of the less-crowded areas in Disneyland might be the fountain in New Orleans Square near Haunted Mansion, Snow White’s wishing well near Sleeping Beauty Castle, the patterned wall near “it’s a small world,” and even some of the props or ride cars outside some of the attractions.

At Disney World, specifically Magic Kingdom, you can also find some beautiful photo spots, including Cinderella’s wishing well, the Cinderella or Beauty and the Beast mosaics, Gaston’s fountain, and the Purple Wall in Tomorrowland.

Though we’ve just listed some inspiration for these outfits, there are a few parameters to keep in mind as you’re putting together your outfit, since the Disney Dress code is very strict about costumes or anything resembling a character costume. This helps to prevent any character confusion and keep the magic of the Parks and characters intact, especially for kids.

The Disneyland Resort warns against inappropriate attire, which might end in being removed from the Park or not being admitted altogether. Per Disney,

However, it is important to know that these rules are different for various special events, such as Oogie Boogie Bash at Disney California Adventure or Mickey’s Not-So-Scary Halloween Party at Magic Kingdom.

For example, the following is a list of guidelines for costumes at special events at Disney World:

For Guests 14 Years of Age or Older:

When selecting your Disneybound outfit, just run it through the Disney dress code checklist to make sure it passes the test. Exercising good judgment is key. Some Guests, however, recently chose to neglect these rules or test the system, such as a Guest who Disneybounded too well as Dolores from Encanto, or another Guest who wanted to sneak into EPCOT as Marvel’s Valkyrie.

Disneybounding is a fantastic way to get creative in your outfit choices while showcasing your love for Disney and celebrating with friends and family in a way that is unique and special to you. Next time you’re at the Disney Parks, try Disneybounding and see how much more meaningful the trip is for you!

Have you ever Disneybounded before? Which character did you use as inspiration? Share your experience in the comments!

Comments Off on How to Go Disneybounding at the Disney Parks