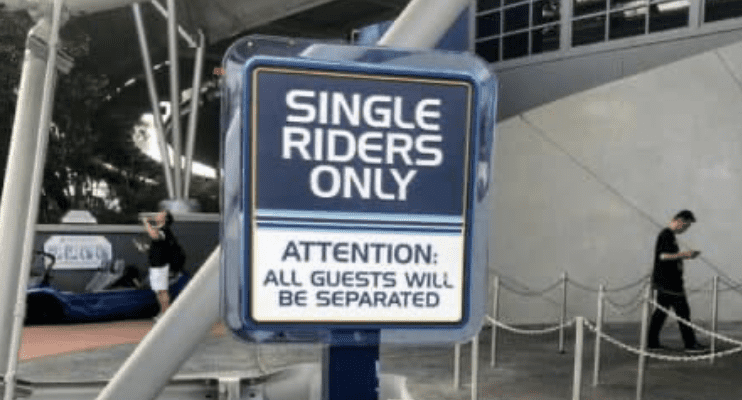 A select few Disneyland Park and Disney California Adventure attractions offer single-rider lines. Guests can volunteer to fill in extra seats in exchange for a shorter wait time. If multiple Guests enter a single-rider line together, they must agree that they likely won’t ride together.

However, some fans feel groups shouldn’t join single-rider lines at all. Many think the name “single” implies only solo riders should join the queue. u/ynsettle recently ignited debate on Reddit after stating, “Does anyone else have a problem with people bringing in their whole families into the line? I can understand maybe one or two people, okay, but six or seven people? I don’t know about that!”

The Disneyland fan got a few supportive comments. “It drives me nuts, I hate it,” u/dumbname1000 agreed. “As someone who sometimes enjoys going to the park on my own for a day it’s really frustrating when groups of people fill up the single rider line. It makes the wait for ACTUAL single riders five times longer.”

Most disagreed. “Nope, don’t care,” u/MoistWaterColor wrote. “Filling single seats doesn’t slow down the main line. If anything it means those people are not in front of you making the line longer.”

There was an unspoken caveat among fans, though. Sometimes, families join the single-rider line because it’s shorter and then get angry at Cast Members when they’re split up – which fans unanimously agreed is unacceptable. “I think it’s fine but I’ve seen families panic when they get split up,” read a popular comment from u/nuggetsofchicken. “Like, what did you think this was? Some secret line that goes faster that the hundreds of other people in the regular line don’t know about or don’t have access to?”

“Works for me. Especially if they don’t care about being split up,” u/Massive_March_6380 said. “My kids and I do it all the time for Radiator Springs Racers. Way better than waiting an hour or more.”

What does Disneyland Say?

Disneyland Resort’s website states that Single Rider Services allow “groups to split up and embark on select attractions individually! A Cast Member can direct you to the designated queue, where your party will be separated to fill remaining seats that aren’t occupied by Guests utilizing stand-by lines.”

So there you have it! According to Disneyland Resort, groups are not only permitted but encouraged to join single-rider lines to “squeeze more magic into your stay by reducing wait times at popular park attractions.”

Before joining a single-rider line, please note the following:

What do you think about single-rider lines?

Comments Off on Should Families Join the Single Rider Line? Fans Debate