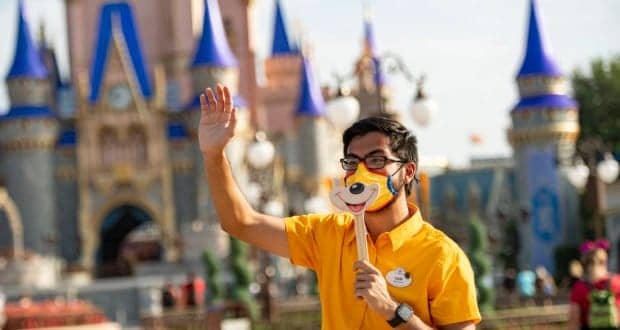 It may be “The Most Magical Place on Earth,” but it also seems the most crowded place on earth.

Everyone has their own favorite when it comes to Magic Kingdom, EPCOT, Disney’s Hollywood Studios, and Disney’s Animal Kingdom, but there is one that often feels a little more “magical” than the others.

At Magic Kingdom, Guests have the opportunity to try everything, from classic Disney dark rides like Haunted Mansion, Pirates of the Caribbean, and Peter Pan’s Flight to thrilling roller coasters such as Big Thunder Mountain Railroad and Splash Mountain, there’s something for everyone. However, Magic Kingdom tends to be the most popular, especially on special and this rings true for an upcoming holiday.

Unfortunately, due to how Walt Disney World is currently operating, Magic Kingdom can be the hardest Park to get a reservation for. While the Parks are definitely crowded, they are still surprisingly operating under a reduced capacity, if you can believe it.

When taking a look at the Walt Disney World reservation calendar, you will see that Thanksgiving is completely sold out. Not to worry, though, only Magic Kingdom is unavailable at this time, meaning you can still visit EPCOT, Hollywood Studios, or Animal Kingdom if you didn’t happen to snag a reservation for Magic Kingdom. 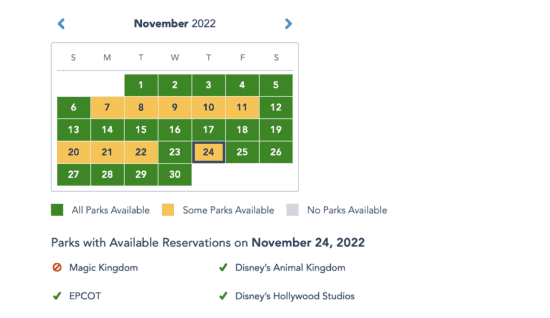 It’s also important to note that Magic Kingdom is unavailable on the 20 and 21 of that week as well. If you happen to be playing a trip, we hope you have already made your reservations!

Are you visiting The Walt Disney World Resort during Thanksgiving?