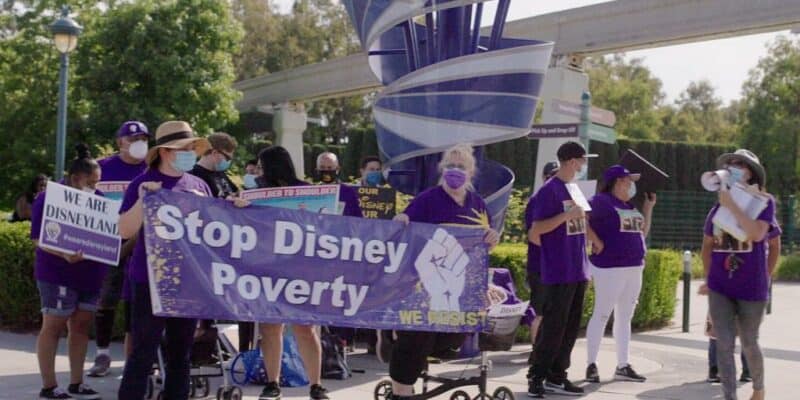 The American Dream and Other Fairy Tales (2022) premiered on September 23. The documentary by Abigail E. Disney, a descendant of Roy Disney, “looks at America’s dysfunctional and unequal economy and asks why the American Dream has worked for the wealthy, yet is a nightmare for people born with less,” according to its logline.

Last week, Abigail Disney spoke with The American Prospect about the documentary, now available on demand. Disney is a vocal advocate for human and workers’ rights, using her family name to bring attention to how Cast Members are treated at Disneyland Resort and Walt Disney World Resort.

It all started ten years ago when Disney visited Disneyland Park. When Disney got her tickets, they came with a hastily-written note that read, “Help us.”

Later, Disney received a Facebook message from a custodial Cast Member, Ralph, who works at the Disney Parks with his wife. They and their four children live with his mother-in-law because two full-time jobs at Disneyland Resort aren’t enough for the family to survive independently.

“Workers at that park are some of the most important ambassadors for the brand,” Disney told Prospect. “So it stands to reason that they shouldn’t be miserable.”

Though Disney has no influence over the company that Roy and Walt Disney created, she has the family name. “Teddy Roosevelt has this great line about do what you can with what you have where you are. That’s what sat with me and kept me awake at night,” Disney said.

In The American Dream and Other Fairy Tales, Disney Cast Members explain that they live in poverty, rely on food stamps, sleep in their cars, avoid medical care, and put off having children to avoid financial stress. A group of Cast Members even set up a food pantry for each other.
Still, the Cast Members are incredibly passionate about their work. “You know Ralph says it best, he says, ‘We do the pixie dust at night,’” Disney told Prospect. “He’s a janitor, he cleans toilets, but he thinks of it as pixie dust. And part of what was enraging for me about it, having met these people and spent time with them, was any company would be so lucky. They should be thanking their lucky stars for these people. They are special.”
These Cast Members are the lucky ones, said Disney. They’re all part of a union in a state with a $15/hour minimum wage, much higher than their counterparts at Walt Disney World Resort in Florida. Disney World Cast Members feared talking with the media so much that Disney had to focus her documentary on the California Parks.
Disney struggled to get her documentary off the ground. After all, The Walt Disney Company is responsible for nearly 40% of box office ticket sales. “The animators wouldn’t work with us, the distributors wouldn’t work with us, the theaters wouldn’t,” Disney explained. “They either want to work with Disney, used to work with Disney, or just don’t want to p*ss Disney off. And Disney is actually quite well known to be a really mean-spirited company that will come for you.”
However, The American Dream and Other Fairy Tales hit number one on iTunes during its release week in September. “The fact that we’ve done this well is a miracle,” Disney said.
Disney recognizes that Anaheim is an expensive place to live, and Disneyland Resort isn’t the only offender. But, she says, they could make a difference.
“If you can’t afford to pay a living wage, you can’t afford to hire a person,” Disney said. “Because a person is a person, not a fungible cost. Not someone who costs this much on a good day and that much on a bad day.”
Will you be watching The American Dream and Other Fairy Tales?

Comments Off on Cast Members Begged Abigail Disney to “Help Us,” Leading to Documentary on Poor Working Conditions