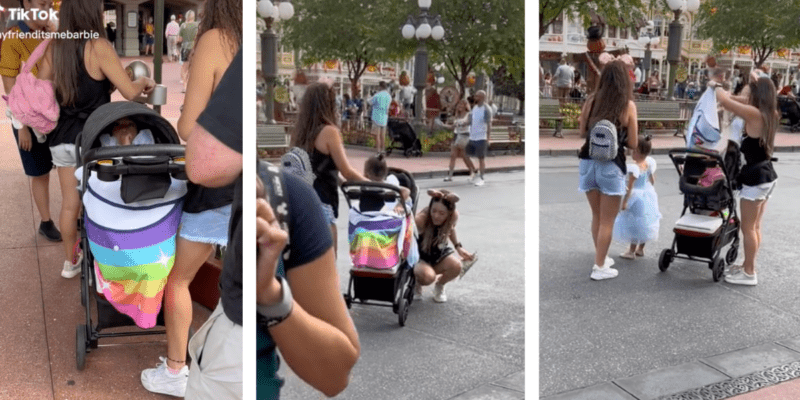 Tickets to Walt Disney World Resort can be expensive, sometimes up to $200 a day for a Park Hopper! Luckily, Disney offers discounted tickets for kids under ten and free admission for children under three!

Related: Do Children Under 3 Need to Reserve a Disney Park Pass?

However, these benefits aren’t enough for some Guests. @myfrienditsmebarbie shared a video of Guests taking advantage of the free toddler admission at Magic Kingdom:

♬ how would they know bad girls club – Chris Gleason

In the video, a little girl sits in a baby-sized stroller while her family scans their Disney Park tickets. Once on Main Street, U.S.A., and out of the view of Disney Cast Members, the family pulls an elementary school-aged child out of the stroller.

The video quickly went viral, though the original poster didn’t know the Guests she filmed. Disney Parks fans were split on the idea, with many saying it was selfishly taking advantage and others saying that Walt Disney World and Disneyland Resort make too much money to worry about a family sneaking in an older child.

“We just teach our kids to lie about their age 😂😂😂 but this is epic 😂😂😂,” Kayla Barilla said. Another commenter, @houseofdollsglam, said she wished her children would play along: “I can’t do this cus if I say “oh she’s two” my child will pop out and be like “nOoOo iM fOuuuR”😂😂😂.”

“All the negative comments on here clearly don’t have kids age 3-5 that are not tall enough for most rides.. good job! We did this too til about 5 😂,” @cccaaattty wrote.

The video was also shared on Reddit, where u/BlotchComics said, “Hopefully Disney sees this and bans them from coming back.” When someone asked why the Disney Parks fan cared what other Guests do, they replied:

“Who cares? How about all of the people who follow the rules. Cheating is cheating even if you think the company is evil and is asking too much money. They’re teaching their child that it’s basically okay to steal.”

u/Wicked-Lee agreed, writing, “What this does is encourage these types of people to continue to be dishonest. They should pay the ticket cost like the rest of us who have children. I have 3. 2 of my kids do not go on rides. I still paid for them to get into Disney and Universal multiple times. That’s what parents should do.”

“Surely that should be a ban for life?” u/DeTHRanger said.

A former Park Entry Cast Member said that families who try to sneak in their older children aren’t as clever as they think. “Worked the front gates, trust me we know 🤣 we are told to just let it go,” @archeech wrote on TikTok.

Though it might be tempting to save some money on a ticket for Magic Kingdom, EPCOT, Disney’s Animal Kingdom, or Disney’s Hollywood Studios, it can result in punishment from Walt Disney World Resort. It’s best to pay the correct ticket price when kids turn three and again once they turn ten.

Do you think sneaking a child into Disney Parks is a problem?