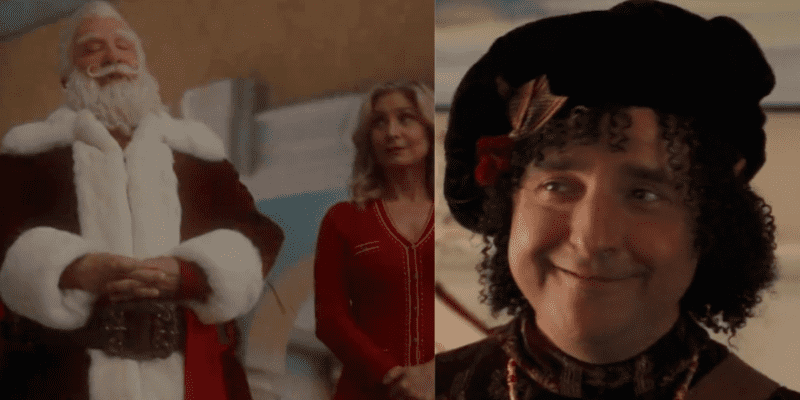 Christmas seemed so far away in January when Disney+ announced that Tim Allen would return to his home at the North Pole as Santa Claus in The Santa Clauses, a Disney+ original series coming this winter.

Fans got a first look at Allen as Santa in June, jolly as ever! At D23 Expo on Saturday, the cast and crew of The Santa Clauses shared the first-ever trailer for the series and announced that the first two episodes would premiere on December 16:

Santa has an announcement to make… 🎅 Tim Allen returns in #TheSantaClauses, streaming November 16 only on #DisneyPlus. #D23Expo

Santa has an announcement to make… 🎅

In the trailer, we see Scott Calvin announce his retirement with his family, including Elizabeth Mitchell reprising her role as Mrs. Claus, Carol Newman-Calvin, and Eric Lloyd returning as Scott’s son, Charlie Calvin. We also get a sneak peek at David Krumholtz returning as the beloved head elf, Bernard.

The elves are shocked when Santa announces his intent to retire and interview new candidates to be Santa Claus. A significant portion of the trailer focuses on a cameo from Peyton Manning, considered one of the greatest NFL quarterbacks of all time, who thinks he might be suitable for the role.

Who will replace Santa? Find out when the first two episodes of The Santa Clauses miniseries stream on Disney Plus, starting November 16.

While The Santa Clause wasn’t as violent and vulgar as Tim Allen intended, it did become a Christmas classic for millions of people and inspired a heartwarming trilogy about the true meaning of magic, love, and family. From Disney:

Scott Calvin is a divorced father whose strained relationship with his son, Charlie, begins to mend only after a bizarre twist of fate transforms him into the new Santa. When the current Mr. Clause falls off the roof on Christmas Eve, Scott dons Santa’s suit, and he and his son are whisked off to the North Pole. There he meets Bernard, the head elf, who tells him about the Clause, a contract stating that whoever puts on the Santa suit must also take on all the responsibilities that go with the position. Scott isn’t too thrilled about his sudden career change. Charlie, however, is overjoyed.

Are you excited about The Santa Clauses?