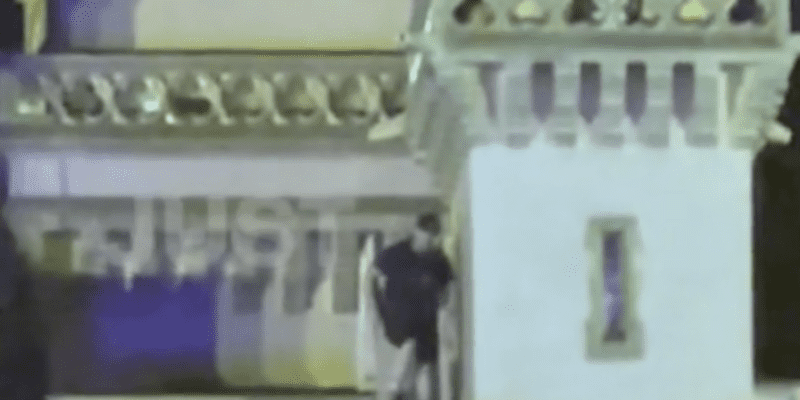 The single most breathtaking sight when stepping into Magic Kingdom at Walt Disney World Resort and walking down Main Street, U.S.A. is the first glimpse you get of Cinderella Castle.

The stunning 189-foot landmark boasts lofty spires and ornate turrets and is the gateway to Fantasyland.

No matter how many times you see Cinderella Castle– whether it be at rope drop as you make your way to your favorite Disney World attraction or if it be at the end of the night when taking in a performance of Disney Enchantment (or the returning Happily Ever After soon)– the iconic landmark simply never gets old.

Over the course of the last year, we’ve reported on a handful of incidents when Disney Park Guests found a way to squeeze past a barrier and climb a portion of the castle. It didn’t take long, however, before they were caught by Disney security and escorted away from the area.

Recently, however, Guests were shocked to see a mysterious man almost at the top of Cinderella Castle at nighttime.

As you can see in the video, the man is climbing a ladder down nearly at the top of the castle. The users in the video speculate that he must be a part of maintenance and many other commenters say that he must be part of the pyrotechnic team. A couple of others, however, said that they believe he looks a lot like a Disney Park Guest because of the fact that he is wearing shorts.

It’s not often that a backstage Disney Cast Member is spotted, so even if this is a Cast Member, this would certainly be a rare sight.

Obviously, it should come as no surprise that many Cast Members are in and around Cinderella Castle during Disney Enchantment (or Happily Ever After soon) to make sure that the show goes as planned, but for one to be spotted is something you certainly won’t see often.

Disney invites Guests to “watch in awe as Cinderella Castle comes to life with magical effects that—for the first time ever—extend down Main Street, U.S.A.” during Disney Enchantment. You can enjoy dazzling lighting that illuminates the Castle courtyard and stunning fireworks that light up the night sky. All the while, classic and reimagined Disney songs will sweep you up into the adventure of a lifetime, along with an original song by 7-time Grammy award-winning songwriter Philip Lawrence.