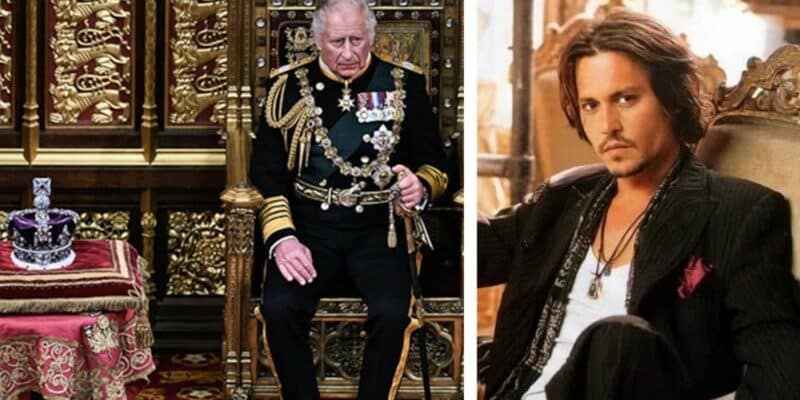 Once upon a time, actor Johnny Depp joked about hoping to be knighted by England’s Prince Charles, but his hopes were dashed due to a barrier created by the actor’s and the dignitary’s speaking.

Charles III, once only referred to as Prince Charles–ex-husband to the late Lady Diana Spencer and current husband of Camilla, once Duchess of Cornwall, now Queen Consort–ascended the throne on September 8, 2022, following the 70-year legacy of his mother, Queen Elizabeth II. But King or not, Charles III is no stranger to rumor, scandal, and ridicule.

But a recently resurfaced video of yet another famously ridiculed man shows him throwing shade (of sorts) at the newly-crowned King of England–but many years before he was king.

During the same time that actor Johnny Depp began to rejoice over his court victory against ex-wife Amber Heard following a six-weeks-long legal battle inside a Fairfax County, Virginia, courtroom, Queen Elizabeth II was celebrating as well, hosting her Platinum Jubilee celebrations. At the time the jury returned its verdict in the case, Johnny Depp was also in Great Britain, hanging out with an old musician buddy and joining him in doing what he reportedly loves more than acting–playing music.

And while it would seem that Depp holds no grudges against Great Britain itself, a newly resurfaced video of the now-59-year-old Pirates of the Caribbean actor seems to chronicle his criticism of then-Prince Charles, who has now ascended the throne left vacant by his late mother, Queen Elizabeth II, who passed away from illness on September 8, 2022.

According to the website The News, the video is actually a clip from The Graham Norton Show (Season 18, episode 9) during which Johnny Depp and Benedict Cumberbatch were both interviewed. In the clip, Depp reveals that he met then-Prince Charles during the 2004 premiere of Finding Neverland.

“I was trying to get that ‘Sir thing,'” Depp joked during the interview, referring to being dubbed a knight. “I sort of shook (Prince Charles’s) hand.”

Depp says he didn’t really understand what Prince Charles was saying to him as they shook hands, but he did try his hand at mimicking Prince Charles’s “words” to him.

“I don’t think he understood a word I said,” Depp explained.

The famed Charlie and the Chocolate Factory actor continued by saying that because neither could understand the other, the exchange between Prince Charles and himself was not necessarily a meaningful one and that during the exchange, Camilla, then-Duchess of Cornwall, seemed kind. However, Depp referred to Camilla as “the other one” and “that one,” and never said her name during the interview.

The audience laughed, as did Graham Norton and Benedict Cumberbatch as Depp imitated then-Prince Charles during the talk amongst the three.

Cumberbatch remarked by saying that the knighthood was surely “in the pocket” for Depp.