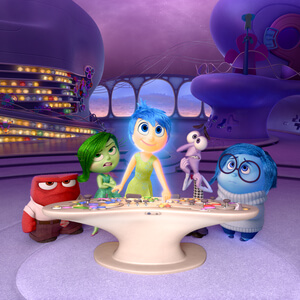 The “Studio Showcase: Celebrate the Magic of Disney and Pixar” panel started at 3:30 p.m. at D23 Expo in Anaheim, California on Friday. However, thanks to Puck News, Inside Out (2015) fans didn’t have to wait for an update on the long-anticipated Pixar sequel, later confirmed by Amy Poehler!

One of the best parts of Inside Out is the star-studded cast. Unfortunately, fans of Disgust (Mindy Kaling) and Fear (Bill Hader) will have to get used to new voice actors, as Hader and Kaling reportedly declined to reprise their roles:

Bill Hader and Mindy Kaling will not return for Pixar’s ‘INSIDE OUT 2’.

Bill Hader and Mindy Kaling will not return for Pixar’s ‘INSIDE OUT 2’.

According to Puck News, Amy Poehler was offered $5 million (plus additional fees and bonuses) to return as Joy. The rest of the main cast, including Hader, Kaling, Phyllis Smith (Sadness), and Lewis Black (Anger), were allegedly only offered $100,000. Disney reportedly later upped the offer, but Hader and Kaling refused.

Disney and Pixar reps declined to comment to Puck News. Though there’s no official word on Smith and Black, the two are likely to reprise their roles. Official announcements are expected from D23 on Friday afternoon.

More on Inside Out

In 2015, Pixar fans stepped into a whirlwind of emotions. From Disney:

Are you excited for Inside Out 2?