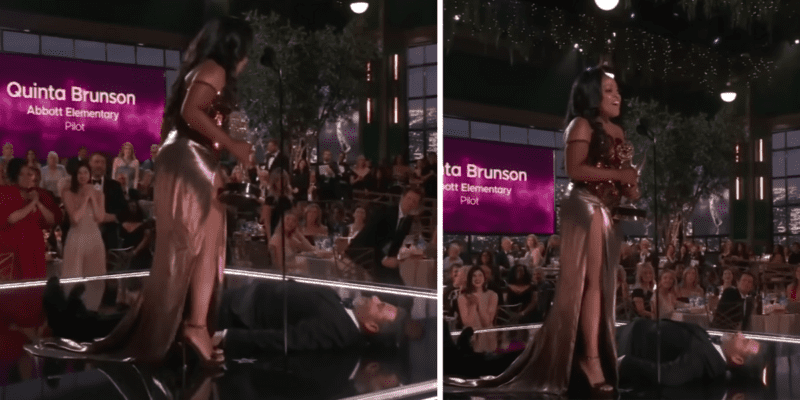 However, many fans felt another notable attendee ruined her moment. As Brunson stepped on stage, late-night host Jimmy Kimmel lay there, motionless, pretending to be dead from a previous bit with co-presenter Will Arnett. Arnett previously dragged Kimmel on stage, saying the host was protesting losing the Variety Talk Series Emmy for the 13th time:

Brunson awkwardly stepped over Kimmel in her gown and tried to joke with the host. “Jimmy, wake up; I won,” she said. “Jimmy? Okay, hold my phone,” she joked. Kimmel gave her a thumbs up and stayed on the ground. The Television Academy then swapped cameras to an angle featuring only Brunson. Kimmel remained lying on the ground offscreen.

Many felt Kimmel was ruining Brunson’s moment, especially as she is the first Black woman to be nominated for three Emmys across the comedy categories in the same year. @InspectorNerd on Twitter wrote:

You can’t convince me that Jimmy Kimmel refusing to get up while Quinta Brunson did her acceptance speech wasn’t pure jealousy and entitlement.

You can't convince me that Jimmy Kimmel refusing to get up while Quinta Brunson did her acceptance speech wasn't pure jealousy and entitlement.

Another Twitter user, @Olas_Truth, shared images of Kimmel in dark body paint portraying Black characters, considered highly offensive Blackface, and said this is yet another racist incident from the host:

Nothing will happen to Jimmy Kimmel for stealing Quinta Brunson’s moment as the first Black woman to win a solo Emmy for writing on a show she created. Anyone who calls this a pattern of Kimmel’s racism will get dragged despite him doing Blackface twice and using the n-word.

Nothing will happen to Jimmy Kimmel for stealing Quinta Brunson’s moment as the first Black woman to win a solo Emmy for writing on a show she created.

Anyone who calls this a pattern of Kimmel’s racism will get dragged despite him doing Blackface twice and using the n-word. pic.twitter.com/Olq7qeviwu

USA Today columnist Suzette Hackney called Kimmel’s “stupid antics” “the latest insult for Black women.” “The symbolism wasn’t lost in many circles: A white man literally lay down to impede a Black woman from reveling in her due,” Hackney wrote.

Brunson addressed reporters after the Emmys and said she has nothing but love for Kimmel. “I know Jimmy Kimmel, and I don’t know, I feel like the bit didn’t bother me that much. I don’t know what the internet thinks,” Brunson said. She said Kimmel was the first to support Abbott Elementary, the first to message her on Instagram, and the first to invite her on his talk show.

“Tomorrow, maybe I’ll be mad at him,” Brunson joked. “I’m gonna be on his show on Wednesday, so I might punch him in the face. I don’t know, we’ll see what happens.”

Kimmel similarly praised Brunson in an Entertainment Tonight interview. “She is so unbelievably talented. And I saw her pilot before it came out on ABC, and I wrote to her, and I was like, ‘I don’t know how we got this, but congratulations. You made a pilot that any network would be ecstatic to get,’” Kimmel said. “She’s a lovely person as well.”

“I had my eyes closed, I had no idea where I was. It was one of the weirdest things that’s ever happened to me,” Kimmel joked of the controversial stage act.

Brunson is expected on Jimmy Kimmel Live! on Wednesday, September 14 at 11:35 p.m. EST.

Do you think Jimmy Kimmel’s joke was disrespectful to Quinta Brunson?