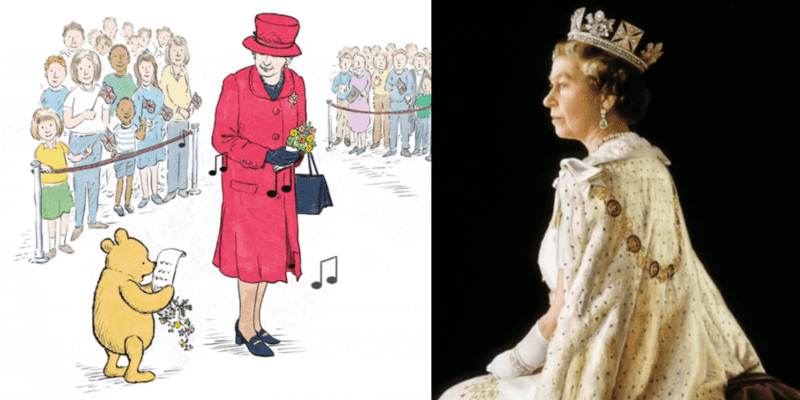 Her Majesty Queen Elizabeth II died Thursday afternoon at Balmoral Castle in Scotland, preceded by her husband, Prince Philip, Duke of Edinburgh. She was 96.

Rest in peace, Your Majesty 🖤

Rest in peace, Your Majesty 🖤 pic.twitter.com/a61oRiRpvE

In the drawing, Queen Elizabeth II greets Winnie the Pooh as crowds wave the Union Flag in the background.

Surprisingly, this isn’t Queen Elizabeth’s first friendship with a bear. As part of Queen Elizabeth’s Platinum Jubilee Celebration earlier this year, Her Majesty enjoyed tea with Paddington Bear. The pair bonded over their love of marmalade sandwiches.

Paddington shared a similar tribute on Twitter this afternoon:

Thank you Ma’am, for everything.

Thank you Ma’am, for everything.

Queen Elizabeth II’s family traveled to Scotland to be by her side at Balmoral as her health declined. According to the BBC, all four of her children were with her before she passed, including Prince Andrew, Princess Anne, Prince Edward, and Prince Charles.

Prince William traveled to Scotland while his wife Kate stayed at the Windsor estate. Prince Harry also joined the declining monarch at Balmoral, though his wife Meghan allegedly stayed behind.

Prince Charles will now assume the role of King Charles III. Camilla, whom he married after the death of Princess Diana, will become Queen Consort.

The Queen just appointed Prime Minister Liz Truss on Tuesday. She said the long-reigning sovereign “provided us with the stability and strength that we needed.”

Buckingham Palace and The British Monarchy released the following statement:

The Queen died peacefully at Balmoral this afternoon.

The King and The Queen Consort will remain at Balmoral this evening and will return to London tomorrow.

Inside the Magic would like to offer our condolences to The Queen’s family, friends, the United Kingdom, and the Commonwealth.