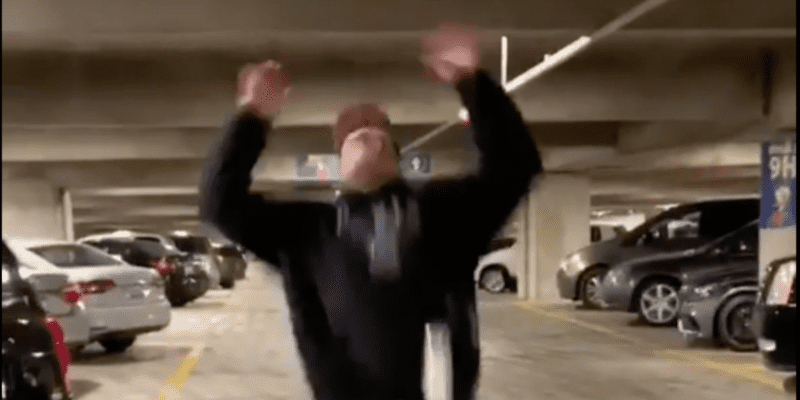 One of the most popular topics among visitors of Disneyland Resort and Walt Disney World Resort is Disney Guest behavior.

Over just the last year, many Guests have reported “rude incidents” involving other Guests, which include line jumping, yelling at Disney Cast Members, and even altercations that, in many cases, have gotten physical.

In just the last couple of months, we’ve reported on two brawls that broke out. One of which happened at Disneyland in the midst of Fantasmic! crowds. The other made international headlines as two families brawled in Fantasyland at Magic Kingdom, resulting in multiple arrests and hospitalizations.

However, this most recent incident to occur at a Disney Park may leave many fans scratching their heads.

While in the parking garage at Disneyland Resort, a Guest had a friend film him as he attempted to do some sort of stunt involving beer. Well, as you might imagine, it didn’t go as planned.

As you can see in the video, the face-painted Guest drinks the beer and then throws it up in the air. He attempts to do a backflip, but lands straight on his head on the concrete floor, nearly breaking his neck.

There are far too many fun experiences to enjoy while visiting Disneyland, whether it be at Disneyland Park or Disney California Adventure. It’s probably better to leave the stunts at home and, perhaps, instead focus on the fun attractions like Haunted Mansion, Pirates of the Caribbean, Jungle Cruise, Star Wars: Galaxy’s Edge, Guardians of the Galaxy: MISSION BREAKOUT, WEB SLINGERS: A Spider-Man Adventure, and much more.