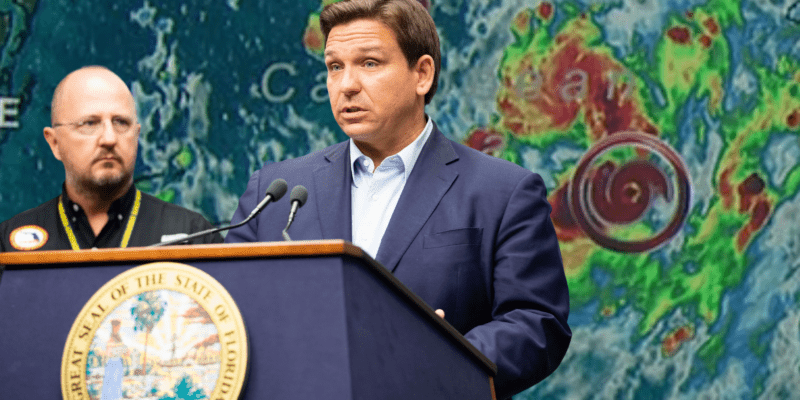 As Tropical Storm Ian continued to churn and intensify in the Caribbean Sea on Sunday afternoon, Florida’s governor Ron DeSantis urged Floridians to prepare for the worst scenario and watch for potential shifts in the storm’s path, as the storm’s “impact will be felt throughout the state.”

Tropical Storm Ian is quickly gaining strength in the Caribbean Sea, and much of the Sunshine State has been included in the “forecast cone” for the storm, which is projected to become a major hurricane in the next few days. On Sunday afternoon, Governor Ron DeSantis called on Florida residents to immediately begin making preparations ahead of the storm, which the National Hurricane Center says could be a Category 3 storm by the time it makes landfall on Florida’s Gulf Coast.

“We are continuing to monitor Tropical Storm Ian,” DeSantis told reporters gathered at the state Emergency Operations Center in Tallahassee on Sunday. “[It] will become a hurricane very soon, within the next 24 hours, and a major hurricane very soon.”

The governor told Floridians closer to the area where the hurricane is expected to make landfall to expect power outages, disruptions in getting fuel, and possible evacuations of certain low-lying and “vulnerable” areas of the state.

Late last week, DeSantis declared a State of Emergency in approximately one-third of Florida’s counties. On Saturday, however, he amended the declaration to include all 67 counties across the state. The declaration activated the Florida National Guard, and it removed weight limits for trucks. Additionally, the declaration authorized emergency refills of medications at pharmacies for up to 30 days.

DeSantis said that 2,500 guardsmen have been mobilized at this time, but more can be activated should the need arise as the storm continues to intensify and move toward Florida.

Ian’s projected track is still uncertain, but regardless, Florida is making preparations for “dangerous storm surge,” according to Emergency Management Director Kevin Guthrie. The department is currently holding calls twice a day with emergency management officials from each county in Florida, as well as with state agencies, in an effort to coordinate actions in response to the storm’s impending landfall.

Comments Off on DeSantis Tells Floridians that Ian’s ‘Impact Will Be Felt Throughout the State’, Storm Path Still Uncertain